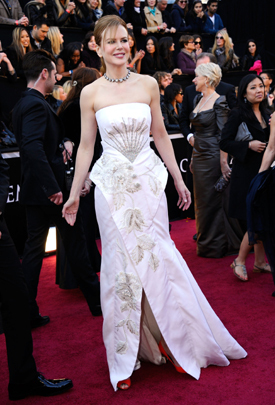 (CBS) While some dazzled us with their Hollywood glamour, such as Anne Hathaway in her scarlet Valentino, others made us run for cover at the 83rd Annual Academy Awards.

Who made worst and best dressed at the 2011 Oscars, according to celebrity style expert Alex Mercado?

Actresses who left Mercado speechless - and not for good reasons - include Nicole Kidman, who wore an excessively-embroidered gown by Christian Dior and Marisa Tomei, who sported a very unflattering 1950s Charles James gown.

Jennifer Hudson and Helena Bonham Carter also bombed, according to Mercado. But others delighted the senses including Michelle Williams and Halle Berry.

Check out our photographsto see who wowed at last night's show and who needs a lesson or two in appropriate Oscar attire.