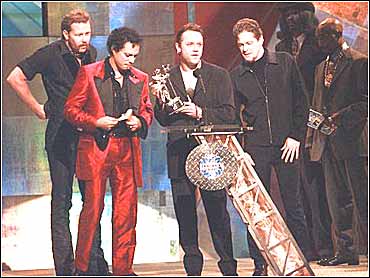 The band Metallica has delivered the screen names of 335,000 people it accuses of music piracy to the online company it says aided the theft.

“Napster will review the over 300,000 fan names that Metallica turned in as soon as possible. If the claims are submitted properly, the company will take the appropriate actions to disable the users Metallica has identified,” Napster attorney Laurence Pulgram said.

Metallica said the alleged violations of its music were monitored and logged by NetPD, a computer consulting firm that found thousands of Napster users making Metallica songs available from April 28-30.

Ulrich suggested the music traders were cowards, using high technology for low-down theft even as some fans broke their Metallica CDs and others waved anti-recording industry banners outside Napster headquarters.

“If they want to steal Metallica's music, instead of hiding behind their computers in their bedrooms and dorm rooms, then just go down to Tower Records and grab them off the shelves,” Ulrich said.

Napster has been at the center of the debate over online music and copyright law since it launched software that allows users to open their hard drives to other people who are online at the same time and swap whatever music files they have stored in the popular MP3 digital format.

The controversy has been closely followed by KNAC.com, the most passionate heavy metal community on the Net. Users flooded the site with rants for and against Metallica's suit against Napster. A sampling follows:

Because Napster officials say the service does not directly provide the copyrighted music -- only the means to get it -- the company claims its service is legal.

Napster's founder, 19-year-old Shawn Fanning, issued a statement saying: “I'm a huge Metallica fan and therefore really sorry that they're going in this direction. If we got the opportunity to explain to the band why Napster exists and why fans enjoy Napster, perhaps we could bring all of this to a peaceful conclusion.”

Metallica is suing Napster in federal court to block users of its file-sharing software from accessing the band's music via the company's computer servers in San Mateo, Calif.

The band accused Napster of copyrigh infringement and racketeering.

“What we're doing is giving Napster the information they thought we couldn't get them, which is basically real people downloading Metallica master songs,” Ulrich said.

Bay Area-based Metallica was once known for free concerts before fervent fans, but its public cause is, more and more, to stamp out online music trading.

“I have sympathy in the sense that if a ton of money was at stake for me, I might act like this also,” said Marc Brown, a musician who watched Ulrich's press conference. “But, objectively, I don't think that they deserve any sympathy.”

Some better-known musicians also disagree with Metallica's suit. Rapper Chuck D said Napster and other file-sharing programs are ways for musicians to reach out to fans.

“Some artists have spoken out against Napster,” the rapper wrote in a letter to The New York Times published April 29. “But I believe that artists should welcome Napster. We should think of it as a new kind of radio a promotional tool that can help artists who don't have the opportunity to get their music played on mainstream radio or on MTV.”

In an online chat session Tuesday, Metallica's lead singer James Hetfield defended turning over the Metallica traders' names, many of whom are the band's fans, to Napster.

“We are going after Napster, the main artery. All the people doing illegal things here, whether with good or bad intentions, we are not going after individual fans. Metallica has always felt fans are family.”