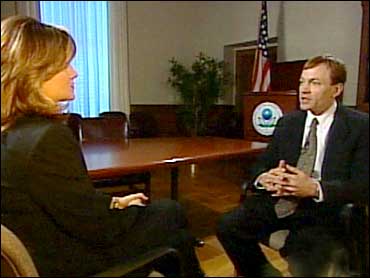 New findings from the Environmental Protection Agency show some planes have unwanted stowaways in their water supply -- potentially dangerous bacteria that could make you sick.

"What we have in the water right now from our test results is an indication that there could be a safety concern," says Tom Skinner, the Environmental Protection Agency's chief enforcement officer.

Over the past six months, his agency randomly tested water on more than 300 planes from domestic and foreign carriers.

In one out of every seven planes, the EPA found water that did not meet federal standards. It found bacteria like coliform and E. coli -- which are often associated with human feces.

Koeppen asked Skinner what could happen to you if you drink contaminated airplane water. "If it's E. coli," he responded, "at times, you can have some sort of intestinal distress. You can have stomach cramps, nausea -- symptoms that can look very similar to the flu or food poisoning."

Skinner tells Koeppen there are many possible sources of contamination. Each time the plane lands at an airport, new water can be pumped on board through hoses that are very difficult to clean. Bacteria can grow in the plane's water tanks and hoses.

That contaminated water can end up not only n the restooms where you wash your hands or brush your teeth, but also in the galleys, where food and drinks are prepared.

Ice cubes are usually brought onto the plane by a vendor -- when the food is brought on board. It's not something that is usually made with the tap water on the plane.

Skinner says it's "fair" to ask flight attendants where the water come from, if you're getting coffee, tea, or a glass of water. He adds, "My guess is that, on most planes, they're not boiling the water before they serve it in coffee or tea."

And that means dangerous bacteria could survive even in a hot cup of coffee or tea -- news that left some travelers a little queasy.

Airline passenger Aquila Haynes told Koeppen she wouldn't want to use that water: "I'm horrified at the moment."

The Air Transport Association, which represents the major airlines in the U.S., disputes the EPA's findings, and says passengers have nothing to fear.

The EPA agrees -- there have been no outbreaks of illness from plane water -- but it still wants to warn the public.

Those most at risk, it says: passengers with compromised immune systems, such as the elderly, cancer patients, pregnant women and young children.

Even though airlines think their water is safe, the industry has agreed to new regulations outlined by the EPA: Carriers will now disinfect their water tanks every three months. They will disinfect their water trucks, hoses and carts once a month. And they'll test the water on every aircraft at least once a year., and notify the EPA when tests come back positive.

The EPA says it will be checking -- and it will fine airlines if they don't take the proper steps to make sure the water is safe.

Will all that make a difference, Koeppen wonders? "We hope it does," Skinner replied, "because the systems are so complex, because they are taking on water from so many different sources, it may not be possible to get that level down to zero."

That's why the EPA says passengers should ask for bottled water on planes -- or bring it with them onboard.

Passengers should probably avoid brushing their teeth or drinking the water in the lavatories, the EPA says, adding that hand washing with soap and water on planes is generally safe for basic personal hygiene. If you're concerned, ask for bottled water for that, too, or use the gels and wipes that kill germs.

Frequent flier Viveca Tibbs, who told Koeppen she wasn't concerned about water on planes in the past, now says she's now afraid to even wash her hands on a plane and instead will likely opt for moist towelettes from now on.