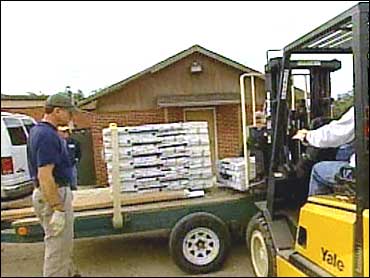 Gulfport, Miss., was one of the communities hit hard when Hurricane Katrina slammed into the Gulf Coast in August. Describing the storm, some people said the hurricane was of biblical proportions.

The Early Show co-anchor Harry Smith caught up with a group of volunteers who found a biblical response to the disaster.

Few people would think of sheet rock and dry wall as modern day manna but this building material is precious stuff on the Gulf Coast. Those supplies are trucked in by The North Carolina Baptist Men.

"By putting hands to their faith and their compassion, it's a way to do something about what they've seen on TV and a way to help people," says Executive Director Richard Brunson.

The Baptist Men have their own lumber yard full of supplies and a bunk house in Gulfport's old National Guard Armory. There are several hundred volunteers working six days a week.

Brunson says the group's goal is to rebuild 600 homes.

Ethel Kendrick's house was in such bad shape she just wanted to leave it behind, but the Baptist men, women and kids stepped in.

The volunteers in Kendrick's house are all from Asheville, N.C., and come from all walks of life. One sells insurance, another is a medical technician, and another is a retired Air Force colonel. Each building site has a man or two with real construction experience to guide the work, which means that novices can help out.

Volunteer Michael Holdcraft says it is his duty to help out.

"Well, this is what I'm supposed to be doing," he says. "My Lord and Savior tells me that part of my duty as a Christian is to help the folks who need help and these folks obviously need a lot of help."

It takes about two weeks for the Baptists to strip out and rebuild the inside of a house. So far they put in more than 30,000 volunteer days in Gulfport.

"It looked like a swirling river inside my house. All over all my furniture was turned upside down and was going all over," remembers Bonny Perry, whose home was ruined by Katrina.

Perry, who figured she would have to live in a FEMA trailer for two years, admits she was scared when the storm struck. "I don't think I'm staying for the next hurricane."

"We didn't have enough insurance money to put the house back together and my daughter says 'Mom, this is the one time in your life when you're going to have to have faith,' " says Perry.

She put her name on a list and soon the Baptists were in her house banging away. The only thing that keeps her now from moving in is carpet and linoleum, and Perry says she is returning her trailer to FEMA.

Asked how rewarding the experience of helping has been, Holdcraft says, "This does nothing but make you feel great. Most of the folks have been here several times and once you get home you feel like you want to come back again."

Speaking to Smith on Tuesday morning, Mayor Brent Warr says there is a mood of "anxious anticipation" in Gulfport.

"You know, it feels kind of like spring here right now," he says. "People are ready to get back building, but they're not sure their home will be worth as much as it should be, especially if they don't get insurance money and have to put their own money into it."

Some people have said they feel the insurance companies have been dragging their feet.

"A lot of commercial businesses have been paid. Residents — of course, everybody that worked here, had a home and lived here — they're waiting with baited breath and frustration is definitely getting high," Warr says.