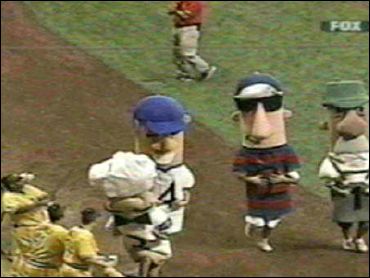 The baseball All-Star Game is coming up, but I probably won't watch.

Baseball is really the only sport I ever cared about, the only one I have followed closely. And it took some doing for baseball to run me off as a fan. But baseball is about to do it. You see, I've about had it with spoiled athletes. And when Barry Bonds, the greatest home run hitter in the game, announced he wouldn't compete in the home run hitting contest before the All-Star Game because, his words, "I'm a grown man, and I don't have to," I thought, 'Well, I'm a grown man, too. Why should I tune in for that kind of arrogance, let alone go to a ballpark and pay to see it when I can get it free just dealing with so many government officials and young congressional aides?'

And then there was this inexplicable scene. A major-league ballplayer who thought it amusing to hit one of these costumed mascots with a bat. This is for real. The 19-year-old woman inside the costume escaped with just a skinned knee. But how could you take a kid to a ball game and explain that? I won't be trying.

The good news is, I have found another game to get my sports fix: women's golf. As we learned from Annika Sorenstam and then last weekend when Hilary Lunke won the Women's Open, one of the best golf tournaments ever, ask anyone who saw it, these women can really play.

And that just reminded me that is what makes sports so much fun, watching people do very difficult things. For sure, it's a lot more fun than watching spoiled brats act like idiots and getting paid for it with our money.