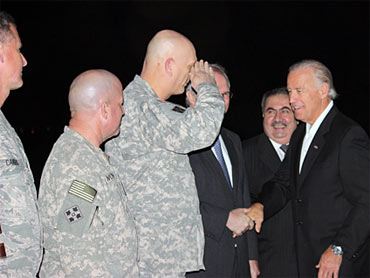 Vice President Joe Biden is in Baghdad to try to ease rising tensions that have threatened to delay Iraq's March elections.

Biden wants to help resolve a dispute over whether hundreds of candidates should be blacklisted for their suspected links to Saddam Hussein's regime.

The dispute breaks along religious lines, with the Shiite majority dominating the government and the once-dominant Sunni minority seeking a greater say in decisions.

The Obama administration hopes the March election will help bring the Sunnis and Shiites together and solidify some of the recent security gains. U.S. troops are expected to accelerate their withdrawal soon after the election.