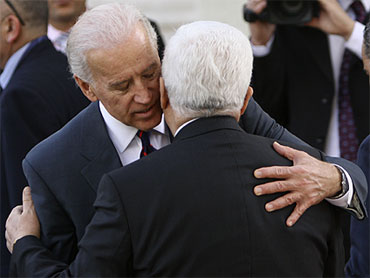 Vice President Joe Biden's displeasure over an Israeli plan to enlarge an east Jerusalem settlement was on display Wednesday as he warned against actions that "inflame tensions" and reassured his Palestinian hosts that they deserve a sustainable, independent state.

The Israeli plans have overshadowed Biden's visit, meant to promote a new round of U.S.-led negotiations, and drew Palestinian accusations that Israel is not serious about peace. Israel apologized for embarrassing Biden with the timing of its announcement, but made clear it had no intention of reversing its plan.

Capping a day of meetings with Palestinian leaders, Biden declared that Washington is committed to brokering a final peace deal - something that has eluded U.S. leaders for nearly two decades.

"The United States pledges to play an active as well as a sustainable role in these talks," Biden said. He stressed the Palestinians deserve an independent state that is "viable and contiguous," a clear message to Israel that the U.S. expects a broad withdrawal from the West Bank as part of a settlement. Palestinians contend that Jewish enclaves dotted across the West Bank would make it impossible for them to sustain a state.

Israel's prime minister, Benjamin Netanyahu, has given only conditional support for Palestinian independence and signaled that he wants to retain control of key parts of the West Bank, including Jewish settlements. The U.S., along with the Palestinians, consider settlements built on lands claimed by the Palestinians to be obstacles to peace.

The Israeli plan to build 1,600 new homes in the east Jerusalem neighborhood of Ramat Shlomo - which would allow it to increase its population of 20,000 by more than half - was an embarrassing setback for Biden.

U.S. State Department spokesman P.J. Crowley described the timing of the announcement as "unusual" on Wednesday, in comments to reporters.

"It would be unusual for an Israeli government to take this kind of action while the vice president is standing next to the prime minister," he said. "We are talking to the government and trying to understand what happened and why."

Standing alongside Palestinian President Mahmoud Abbas, Biden condemned the Israeli plan and urged both sides to refrain from actions "that inflame tensions or prejudice the outcome of talks."

"It's incumbent on both parties to build an atmosphere of support for negotiations, and not to complicate them," he said.

The European Union also urged Israel to reverse its decision "and to refrain from unilateral decisions and actions that may jeopardize" negotiations. British Foreign Secretary David Miliband called it a "bad decision at the wrong time." Germany said the plan was "not acceptable" given the two sides' recent agreement to renew talks.

Just ahead of Biden's arrival Monday, Israel and the Palestinians both agreed to resume indirect negotiations through the mediation of U.S. envoy George Mitchell. The resumption of talks ends a 14-month deadlock and marks the Obama administration's first accomplishment in the Israeli-Palestinian arena.

Israeli settlement construction had been a key issue stalling the negotiations, and Abbas said Wednesday that new Israeli building, especially in Jerusalem, threatened the negotiations before they got off the ground.

"We call on Israel to cancel these decisions," Abbas said. "I call on the Israeli government not to lose a chance to make peace. I call on them to halt settlement building and to stop imposing facts on the ground, and to give the efforts of the Obama administration and Senator Mitchell the chance to succeed.

The fate of Jewish settlements is one of the most contentious issues in the Israeli-Palestinian conflict. Some 270,000 settlers live in the West Bank, in addition to 180,000 Israelis living in Jewish neighborhoods built in east Jerusalem. The Palestinians claim both areas captured by Israel in the 1967 Mideast war - as parts of a future state.

The dispute over the settlements has been a key reason for the deadlock in peace talks over the past year. Abbas has insisted on a full freeze on settlement construction as a condition for resuming talks.

Israeli Prime Minister Benjamin Netanyahu has imposed a partial slowdown on West Bank construction, but allowed building in east Jerusalem to continue. Israel considers all of Jerusalem to be its capital, and Netanyahu has said he will never share control of the holy city.

Israeli Interior Minister Eli Yishai, whose office announced the latest construction plans in east Jerusalem, apologized Wednesday for disrupting Biden's visit. But he said the problem was merely about timing, not substance.

"We had no intention, no desire, to offend or taunt an important man like the vice president during his visit," Yishai told Israel Radio. "I am very sorry for the embarrassment ... Next time we need to take timing into account."

Ministry spokeswoman Efrat Orbach said the ministry routinely issues announcements of planning decisions immediately after they are taken. But this is not the first time that such announcements have dovetailed with visits by top U.S. officials. Plans for hundreds of settlement apartments were announced during the peace mission of former Secretary of State Condoleezza Rice.

The Israeli announcement drew an unusually harsh condemnation from Biden late Tuesday. And in an apparent snub Tuesday night, Biden pointedly arrived 90 minutes late to his scheduled dinner with Netanyahu.

Israel's opposition Kadima Party said it is planning a no-confidence vote in the prime minister in parliament for "destroying" the Biden visit.

"This is absurd. It is disdainful of the Arab and the Palestinian positions and the American mediation," said Hossam Zaki, a spokesman for the Egyptian Foreign Ministry.

Israeli media lambasted the move, calling it an embarrassment.

"A slap heard round the world," read the headline of a front-page commentary in Israel's Haaretz daily.