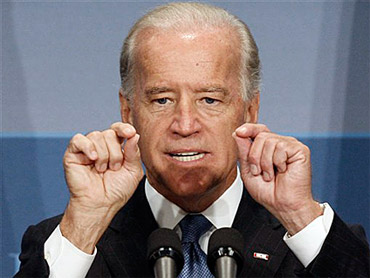 Nearly 200 days into the effort, Biden delivered an upbeat report card about the $787 billion rescue effort that President Barack Obama pushed through Congress. He quoted estimates by private analysts that the plan has created or saved 500,000 to 750,000 jobs so far. But many million people remain out of work.

The effectiveness of the two-year program is a matter of sharp political debate, and Biden sought to counter critics with a listing of tangible results.

"One of the criticisms is that it is simply a grab bag of different programs," Biden said in a speech at The Brookings Institution. "But the fact that the recovery act is multifaceted doesn't reflect a lack of design, it is the design."

The stimulus package is a mix of tax cuts, increased spending on Medicaid and huge investments in infrastructure, education, energy projects and more.

With Obama on vacation at the Camp David presidential retreat, the White House hoped Biden's message would get through on perhaps a quieter news day.

A Gallup poll last month found 51 percent of Americans wished the government had spent less to stimulate the economy. The same poll found 41 percent thought the stimulus package was helping the economy in the short term; 33 percent saw no effect; and 24 percent said it was making the economy worse.

And public approval of Obama's performance and of his handling of the economy has slipped. Polls now put both figures slightly above 50 percent.

The White House wants people to take a longer view. A string of indicators show the economy is recovering, but many people are hurting financially.

"Our goal is not just to emerge from the recession. We will," Biden said. "That's not enough. We must emerge stronger than we were before we entered it."