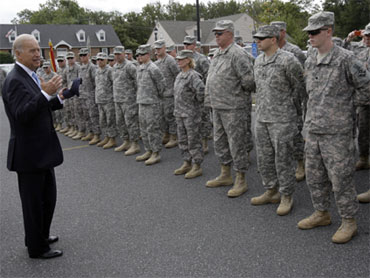 Biden was joined in Dover by about 800 Delaware residents welcoming home the 261st Signal Brigade, the News Journal reports.

The vice president noted in his remarks that he had been to Afghanistan and Iraq several times in the past year, saying he "got to see our beloved son three times."

Biden, who spoke for about 10 minutes, was joined by his wife Jill and Delaware Governor Jack Markell at the ceremony.

Beau Biden served in Iraq as a lawyer with the Judge Advocate General's office. There is speculation that in 2010 the younger Biden will run for the Senate seat previously held by his father.

That seat is now held by Biden loyalist Ted Kaufman, who was appointed to the seat after Joe Biden became vice president. Kaufman has said he will not run for a full term in 2010.