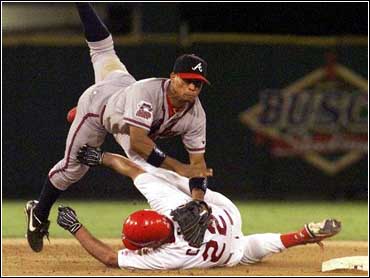 The NL East-leading Braves have the majors' best record at 68-43 after taking two of three from the NL Central-leading Cardinals. Atlanta is 33-12 against St. Louis since 1996.

Galarraga had a two-run double in the first off Darryl Kile (13-7) and an RBI single in the sixth. He also singled in the eighth and was 6-for-12 in the series.

Andruw Jones' groundout off Mike Timlin snapped a seventh-inning tie, and Javy Lopez added a run-scoring single in the eighth off Timlin.

Will Clark homered for the fourth consecutive start since joining the Cardinals at the trading deadline and also had two singles, one scoring a run in the sixth. Clark, who's playing first base while Mark McGwire is out with a knee injury, is 9-for-14 with seven RBIs.

The Cardinals answered with two runs in the bottom half, opening with three hits off Kevin Millwood. Jim Edmonds had an RBI single and a second run scored on a fielding error by right fielder Brian Jordan on the play.

Clark tied it when he hit a 2-2 pitch from Millwood over the right-field wall leading off the fourth. He also homered in four straight games Aug. 5-9, 1987, for the San Francisco Giants.

Clark got a standing ovation from a sellout crowd of 47,623 and then made his second curtain call in three games at Busch Stadium.

The Braves regained the lead on Jordan's double and a single by Galarraga in the sixth, but the Cardinals tied it again on Clark's RBI single off Mike Remlinger.

Remlinger (3-2) struck out Ray Lankford and got Fernando Tatis to ground out into a double play with runners on first and second to end the sixth.

Braves reliever John Rocker entered with one on and one out in the eighth to resounding boos. He retired two of the three batters he faced.

Kerry Ligtenberg, the Braves' fifth pitcher, worked the ninth for his 10th save in 11 chances.