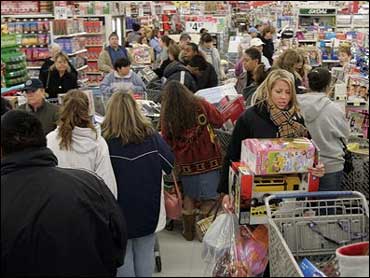 The outlook for holiday shopping was hazy Thursday after the nation's retailers reported a mixed start to the holiday season that showed consumers willing to spend only when they found a bargain.

As merchants released their results Thursday, the winners were those that heavily discounted over the Thanksgiving weekend, including Wal-Mart Stores Inc. and J.C. Penney Co. Inc. One of the biggest disappointments was upscale Nordstrom Inc., usually a top performer.

An upbeat surprise came from Limited Brands Inc., which has long struggled with disappointing sales, announced solid gains in November, a sign that its fashion makeover could be working.

"Things are improving, but I still think that consumers are being careful with their shopping," said Madison Riley, a strategist at Kurt Salmon Associates. "The holiday season won't be a disaster. It will be solid, but it won't be a home run."

"Overall, department stores took it on the chin," he said.

The Commerce Department reported separately Thursday that personal spending edged up modestly in October, while incomes rose 0.4 percent. In another report, the Labor Department said the number of hurricane-related job losses totaled just 9,600 last week, a substantial improvement from the 21,000 the previous week. The total number of jobs lost to Katrina, Rita and Wilma is now estimated at 592,000.

Retail analysts were optimistic going into the holiday season because gasoline prices have fallen from their September highs. The latest batch of upbeat economic data and a rebound in consumer confidence in November were encouraging signs that consumers might be more generous this holiday season.

But merchants do face big challenges this season — although gas prices have fallen, they remain above last year's levels and home heating costs are also expected to be high this winter.

Wal-Mart, which stumbled last holiday season by not discounting enough, benefited by offering more markdowns this year. The world's largest retailer posted a same-store sales increase of 4.3 percent, matching estimates from analysts polled by Thomson Financial. Same-store sales are those from stores open at least a year, and are considered the best indicator of a retailer's health.

Still, the discounter said it expects a modest same-store sales growth for December of 2 percent to 4 percent.

Discount rival Target Corp., whose business may have been hurt by Wal-Mart's more aggressive stance, had a 2.6 percent increase in same-store sales, in line with its already reduced forecast of 2 percent to 3 percent. The results came slightly under the 2.7 percent Wall Street forecast. Total sales rose 3.2 percent.

"Our performance strengthened as the month progressed and sales growth for the Thanksgiving week was consistent with our original expectations," said Bob Ulrich, chairman and CEO of Target. He called the outlook for the holiday season "optimistic."

Costco reported a 6 percent gain last month in same-store sales. That was down from the 7.9 percent estimate. Costco's total sales rose 9 percent.

"Although business was strong over the Thanksgiving Day weekend, we were disappointed with our sales earlier in November," said Terry J. Lundgren, Federated's chairman, president and CEO, in a statement.

J.C. Penney had a same-store sales gain of 3.6 percent in its department store group, better than the 1.9 percent estimate. Total sales rose 9.3 percent.

Gap Inc. posted a 4 percent decrease in same-store sales, though the results were better than the 5.1 percent drop analysts forecast. Total sales rose were unchanged from a year ago.

Limited, which has been reworking its merchandise, posted a 5 percent gain in same-store sales, better than the 2 percent forecast. Total sales rose 7 percent.