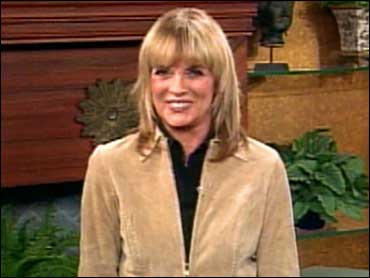 On Sunday, the original cast members of "Dallas" gather to share their memories of television's second-longest running prime-time entertainment series.

She also attributes its success to the fact that "we only had three channels then."

"For me, it was a relationship show and it was all about, you know, family relationships. Dysfunctional!"

The special, "Dallas Reunion," was shot at the Southfork Ranch just outside Dallas, Texas, where the actors all lived together.

The cast tours the grounds and talk about the series most infamous storylines, including the reasons Kristin shot J.R.

Larry Hagman shares his own behind-the-scenes home movies on the "Dallas" sets.

Gray says she loved playing Sue Ellen because her character started as a victim and ended as a survivor. "So actresses talk about arcs and characters, where they start here and go there, but Sue Ellen had the most beautiful - I call her the rainbow arc. She had the most magnificent long-suffering arc of anybody that I know. And for an actor it was a dream."

Gray says the reunion special is "fabulous" but notes, "We're not acting. It's just us reminiscing and having fun."

"Dallas," with 356 episodes broadcast during 13 seasons on CBS (April 2, 1978, to May 3, 1991), remains television's second-longest-running primetime entertainment series, surpassed only by "Gunsmoke," with 402 episodes.