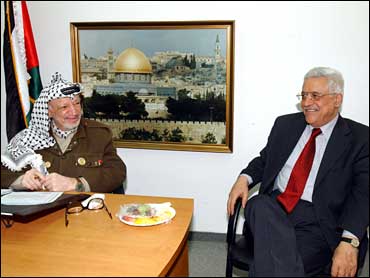 A Mideast summit this weekend kicked off 10 days of high level diplomacy that will end up at the White House later this month.

The diplomatic drive for progress on a Mideast peace plan widened Monday when the Palestinian premier headed to Egypt for talks and the European Union planned to host the Israeli and Palestinian foreign ministers in Brussels.

A temporary cease-fire declared by main Palestinian militant groups on June 29 has greatly reduced violence, but progress on the U.S.-backed "road map" peace plan has been thwarted by an Israeli-Palestinian standoff over conditions for moving ahead.

Abbas was to head to Egypt on Monday for talks with President Hosni Mubarak, to be followed by a visit to King Abdullah II in Jordan, most likely on Wednesday. The trip will lead to Washington, where Abbas is to meet Bush at the White House on Friday. Sharon is scheduled to meet separately with Bush on July 29.

The EU helped the United States, Russia and the United Nations draft the "road map" plan, which calls for an end to violence and a Palestinian state by 2005. EU officials said they wanted to make sure on Monday that the plan is being implemented and press for more confidence-building measures.

On Sunday, each side indicated willingness to move toward the other — the Palestinians by outlawing violent groups and the Israelis by hinting at new flexibility over release of prisoners.

Palestinian leader Yasser Arafat on Sunday reissued a 1998 decree outlawing incitement to violence and advocating change by use of force, a move aimed at militant groups and anchoring a shaky cease-fire in Palestinian law.

But the meeting, the fourth in Jerusalem between Sharon and Abbas in recent weeks, produced no concrete results on the prisoner dispute and other issues.

Israel currently holds some 7,700 Palestinians in jail and has agreed to release several hundred, though it has refused to free anyone directly involved in attacks on Israelis. Abbas, however, is pressing the Israelis to release thousands of them, including members of militant groups Hamas and Islamic Jihad.

Sharon agreed to consider widening the scope of the releases, but postponed a special ministerial committee meeting on that until after he returns from Washington. The Palestinians said they were disappointed by the delay, hoping that the United States would urge the Israelis to move faster.

Also on Sunday, a Palestinian man was killed when he activated an explosive charge at a passing Israeli patrol near the West Bank city of Jenin, military sources said. No Israelis were injured in the incident. Palestinian security officials identified the bomber as Rami Isleit, 23, a member of Islamic Jihad.

In what appeared to be an effort to satisfy Israel's demands for action against the militants, the decree issued by Arafat bans "incitement that encourages the use of violence that harms the relations with foreign countries" and says violators would be judged according to Palestinian law.

In language that seemed directed at militant groups, it also bans "illegal organizations that encourage violence and arouse the public to bring about change through force" and "incitement that encourages the violation of the agreements signed by the PLO and foreign countries." That appeared to be a reference to the road map, and making violation of the truce a punishable offense.