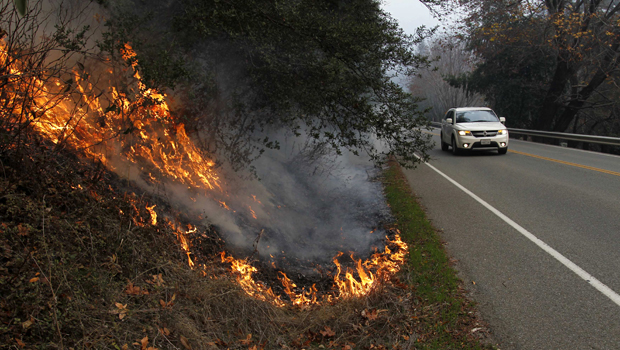 BIG SUR, Calif. -- Firefighters expected to get some help Wednesday from the weather as they battle an unusual late fall wildfire that has destroyed more than a dozen homes and forced about 100 people to flee the scenic Big Sur region overlooking the Pacific Ocean.

Winds were expected to be calm during the day, and there was a 20 percent chance of rain at night, according to the National Weather Service.

Authorities said that as of mid-morning Wednesday the fire was 40 percent contained. Full containment was expected by late Friday.

"We're cautiously optimistic that we're going to get this nailed down by then," Madsen said. "We have temperatures going down as a cold front has come in and cooled things down dramatically."

The blaze has destroyed 22 buildings, 14 of which were homes, authorities said.

Among the homes destroyed was that of Big Sur Fire Chief Martha Karstens. She tearfully told reporters Monday night that the loss of her home of 23 years had not yet sunk in.

"I can't remember if we've ever had a fire in December," she told CBS News. "We've had it earlier in the beginning of the year like in April or May but December? No. Christmas around the corner? No. My Christmas presents burned up."

Two firefighters have received minor injuries while battling the blaze, including one who hit his knee on a rock in the rough terrain and another who suffered from heat exhaustion, Madsen said.

Mark Nunez, the incident commander of the team fighting the fire, said 879 firefighters had deployed to the area, and thus far, weather has been working in their favor.

Big Sur - miles of rugged coast, cliffs and wilderness - is a popular tourist destination about 150 miles south of San Francisco with high-end resorts and beautiful views of the Pacific Ocean.

The fire was burning a little more than a mile from Ventana Inn and Spa, a favorite spot among celebrities where former Facebook president and Napster co-founder Sean Parker got married in June.

In the summer of 2008, a lightning-sparked wildfire forced the evacuation of Big Sur and blackened 250 square miles before it was contained. That blaze burned more than a dozen homes.

California's fire season traditionally peaks by mid-fall, but the drought of the last several years has given the state essentially year-round danger.

Residents anxiously tried to get information about their homes.

Jim Walters, who was up the coast in Carmel when the blaze started, told the Monterey Herald he had gone to entrance to his street, local restaurants and the fire command station but had no luck learning anything about his home.

The Red Cross set up an overnight shelter for displaced people, Madsen said.

A wildfire so late in the year is unusual in Northern California, where the fire season is generally at its peak over the summer, said Larry Smith, a meteorologist with the National Weather Service in Monterey.

Smith said the Big Sur area has averaged nearly 45 inches of rain yearly between 1981 and 2010. But the area has received about 7 inches of rain this year, about 16 percent of its normal amount.

Still, Madsen said Wednesday they were hopeful they could contain the blaze this week as temperatures were expected to be in the 50s the next couple of days.

The cause of the fire remains under investigation.