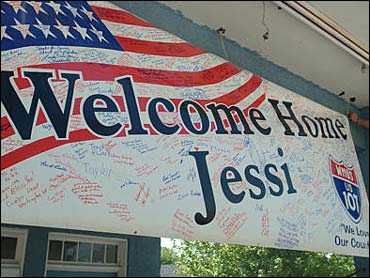 Jessica Lynch has never seen her home county look quite like this: bedecked, bow-strewn and virtually weedless.

Then again, Wirt County has never planned a celebration quite like Tuesday's homecoming of Lynch, the 20-year-old Army private who was taken prisoner in Iraq in March, and whose survival and recovery by U.S. forces made her a hero.

Knowing that hundreds of journalists will be descending on this county seat of about 1,000 for Lynch's first public comments about her ordeal, the locals have been painting, pruning and preening for weeks.

"Every weed in every crack is down to dirt," said Debbie Hennen, the county assessor. "We don't want people to see weeds. We want them to say, 'Gosh, that is such a friendly town. That's a place I'd like to live."'

Many of the flags and yellow ribbons that sprouted after Lynch's maintenance convoy drove into an ambush March 23 have been replaced with new versions, especially along the five miles Lynch's motorcade will drive on her journey's final leg from Elizabeth to her home town of Palestine.

Lynch - who is still recuperating from multiple broken bones and other injuries - and family members will be flown to Elizabeth by helicopter from Walter Reed Army Medical Hospital in Washington, D.C.

Her public statement will be brief, and she will not take questions from reporters, family spokesman Randy Coleman has said.

Wayne Wright, commander of the local Veterans of Foreign Wars post, drove across the state line to Marietta, Ohio, to buy the dozens of flagpoles now attached to utility poles along the motorcade route.

"We want to let her know that we care," Wright said.

On a break Sunday from retarring the parking lot of Dick's Market, a shirtless Todd Somerville said he had paving jobs lined up across the county over the next two days.

"Oh, yeah, lots of people want to spruce up their places for Jessi," he said.

Beneath the ribbons and paint, Lynch will find life essentially unchanged in this county of fewer than 6,000 people, where everyone seems to know at least a Lynch cousin or aunt, and where folks routinely rally for neighbors in need.

"This is almost like an Amish community in some ways," said Jim Bostic, 46, of Spencer. "We're 50 years behind the times, but in a good way."

Charlene Curfman's Palestine home burned down 27 years ago while she was pregnant, but within two days neighbors in the unincorporated town of about 300 had given her and her husband everything they needed.

"It's not just one person, it's everyone," said Curfman, 53, a beauty salon owner. "People will help each other and never expect repayment."

Some locals say the efforts to help Lynch, including the rebuilding of her house to accommodate the wheelchair she still needs, have united the county as never before.

"We've all shared the lows of her disappearance to the highs of her rescue," said Greg Thorn, 44, who with his brother inherited Dick's Market from their father. "I think it's made a close-knit community even more so."

Lynch's convoy was ambushed near the Iraqi city of Nasiriyah after it made a wrong turn. Eleven soldiers from the convoy were killed; five others were captured and held apart from Lynch for three weeks before their release.

Lynch, a supply clerk in the 507th Maintenance Company, was injured after her Humvee utility vehicle was hit by a rocket-propelled grenade and crashed into another vehicle in the convoy. U.S. forces recovered Lynch at an Iraqi hospital in Nasiriyah April 1.