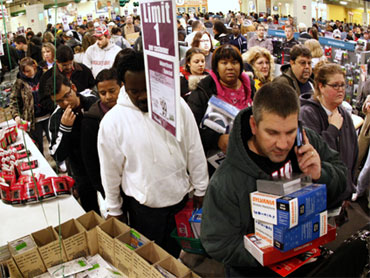 It won't be long now before many of us turn our attention from Thanksgiving feasting to Black Friday buying, on the day after.

And on "The Early Show" Wednesday, Brad Wilson, founder and editor in chief of Brad'sDeals.com and BlackFriday2010.com gave viewers a head-start on finding the best deals out there - sales worthy of setting your alarm to rush to!

Wilson says timing is everything on Black Friday - such as knowing which stores open early and when.

He told CBS News, "The deals are amazing, really rock-bottom this year, but most people are too busy to wade through dozens of 50-page circulars. We've done the work of highlighting the best deals for you, but knowing when stores open will be key. These super sales are only good while supplies last. Toys-R-Us opens at 10 p.m. on Thanksgiving, Kohl's sales kick off at 3 a.m., and Sears and Target at 4 a.m. on Friday. Walmart's Black Friday sales at 12:01 a.m. - with the exception of electronics which go on sale at 5 a.m. Plot your route from store-to-store based on store opening times, and since quantities are very limited, arrive before the doors open.

As for those great deals:

The marketing war for your holiday shopping dollars is well under way. Target officially unveils its Black Friday deals online today (Nov. 24th), but the print circular won't reach homes until Thanksgiving Day. Target will attract plenty of Black Friday attention with their $3 appliance deals including this Chefmate 2 Slice Toaster (which usually retails for $10 dollars). Read the fine print on deals this good. There is a supply and demand issue here and you will need to be at the head of the line to nab one of these items. And…bonus shopping tip - Target is also offering a $10 gift card for every $100 spent from 5 a.m. to noon on Friday.

Zhu Zhu hamsters, which are interactive toy pets, each with their own set of over 40 sound effects, squeaks and chirps, are still one the top-selling toys for kids this Christmas. These were also the Winner of the 2010 Toy of the Year Award. If you haven't seen these furry creatures, you may not know that they can be put in either of two play modes: "nurturing mode," in which they coo and purr, or "adventure mode," in which they explore their habitat and respond to various stimuli. They also have a sleep mode (if you get tired of all their buzzing around.) The most popular kids toys are almost never discounted this deep, but you can scoop up Zhu Zhu Pets (which typically sell for around $10.00,) for $4 a piece at Walmart starting at midnight on Nov 26, while supplies last.

I usually steer jeweler shoppers to online sites where they don't collect sales tax, shipping is free, and returns are extremely simple, but this deal beats any of that. The traditional jewelry store model is being challenged by deals like this…this 2-carat diamond bracelet which usually retails for $575 at Kohl's, will go for $99 bucks during Kohl's Early Bird hours (3AM - 1PM). That's a savings of 82%. Just as they say in their ad, you can "stand out with sparkling style wearing this diamond bracelet." It features multiple rows of diamonds on top of a sterling silver bracelet.

This luggage, which usually retails for $200, may not be brand name, but it is just an amazing deal (at 75 percent off!) You're going to get all 5 pieces for $50 bucks! This set probably won't last you a lifetime, but it's a steal.

When you are talking about cashmere the price is usually in the hundreds, but the price of cashmere has actually come down. That said - it has not come down this far and this is a great deal. In fact, this sweater usually retails for $100.00, but has been on sale this week for $54.99. Kohl's is undercutting its own price for Black Friday.

This is an all time low for a 32" HDTV - ever, anywhere! This was a special buy for Walmart (at $298) for Black Friday, but then they reduced it another 33 percent ($100 off). This is the perfect example of how the biggest retailers are using their purchasing power to undercut the competition on price. These will also go very fast. According to Walmart's site "this 32 LCD HDTV delivers natural, vivid images for a superb viewing experience, and a virtual surround system provides great audio." When you are talking about cashmere the price is usually in the hundreds, but the price of cashmere has actually come down. That said - it has not come down this far and this is a great deal.

For even more great deals, go to Page 2.

These cameras (which usually cost $171 on Amazon) are small, high quality, and easy to use. It comes with easy to use editing software for your computer. Just a great deal - usually not this cheap - especially without having to mess with a rebate. Plus - this is the newest model (3rd generation / 8 GB / 2 Hours), not an older model. You can shoot up to 2 hours of better-than-ever HD video on the even slimmer model. They're really simple to use (just press the big red button to start and stop recording) and edit and share your videos with the FlipShare software.

Shopping bonus - You'll $30 in Kohl's Cash you'd collect by spending over $150. How does that work? Well for every $50 spent (in store or online) shoppers get $10 Kohl's Cash back that can be used towards anything in the store on a future purchase. For example the Kohl's Cash received on Black Friday would be available for use November 29 - December 6. You can't immediately use the card.

Sam's Club has low prices every day, but is going even further on Black Friday. With all the competition in motion gaming coming to market around Christmas, the price of a Wii - especially the bundles with 2 controllers, 2 wheels, 2 nunchucks, 3 games, are coming way down. Don't expect the new gaming systems to come at a discount for some time. This Wii bundle is usually $350 at Sam's Club, but will be 15 percent off making it $299.