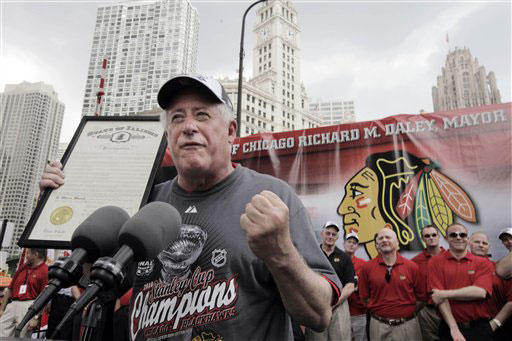 Republican State Sen. Bill Brady has conceded defeat in the race for governor of Illinois.

He trailed incumbent Democrat Pat Quinn by some 19,000 votes, and independent analyses suggested he could not make up the difference in absentees and uncounted ballots. Brady told a news conference in Bloomington, Ill. that he had called Gov. Pat Quinn to concede.

"Illinois families need leadership," said a downcast Brady, "and it is time after a bitter election that our leaders come together and unite for the families of Illinois."

Quinn, who had been on a victory lap for two days without that requisite concession to go with it, now can turn once again to the state's daunting $13 billion budget deficit. His partial solution at this point is to borrow about $4 billion to keep the state employee pension system afloat.

It's an idea that has drawn the sound of one hand clapping from state lawmakers so far. A similarly muted reception has greeted his proposal to raise the state income tax by a third.

Quinn told reporters Friday afternoon, "We have many challenges ahead. This is an awesome job. I am greatly honored to hold the job of governor."

The only national significance to all of this is that Illinois is one of the few examples of the Democrats bucking the tide of Republican victories in statehouses this week.

And while lately Illinois has trended Democratic, it did have Republican governors for 24 years before the notorious Democrat Rod Blagojevich went to Springfield in 2003.

(By the way, the last one of those Republican governors, George Ryan, is currently residing in a federal prison, serving out a six-year sentence for fraud and racketeering.)

Quinn was the lieutenant governor who got the top job two years ago when Blagojevich, who succeeded the aforementioned Ryan, was impeached and removed from office by the state legislature. The vote to make him go away was a lopsided 59-0, and some statehouse wags suggested even that did not adequately reflect their hostility to the man.

But Blagojevich keeps bobbing back to the surface nonetheless.

He is appealing his conviction in federal court on one count of lying to the FBI. The jury was hung on a host of other counts connected to the charge that he schemed to sell the U.S. senate seat once occupied by Barack Obama and tried to shake down a number of enterprises in search of campaign donations. Before his infamous exit, Blagojevich appointed career Illinois politician Roland Burris to the senate. Burris' evident ardor for the job raised questions about whether there was some financial quid pro quo involved in that deal too.

In any event, Senator Burris survived repeated calls for his resignation within days of getting to Washington and, besmirched but unbowed, he will leave office shortly. Republican Rep. Mark Kirk won the election Tuesday to replace Burris and serve out the rest of his term plus the six years to follow.

Showing commendable foresight, however, Burris has already tended to his "legacy."

A few years back he had an imposing mausoleumbuilt at the Oak Woods Cemetery on Chicago's south side. The inscription "Trail Blazer" tops a list of his accomplishments chiseled into the stone. (See it at left.) Among those on display for anyone strolling by his final resting place: "The first African-American exchange student from Southern Illinois University to the University of Hamburg, Germany," and, "The first non-CPA to be on the board of the Illinois CPA Society."

The inscription of "United States Senator" was added just hours after Burris' appointment.

Now as for Blagojevich, he can be seen on television these days extolling the benefits of Wonderful Pistachios. The Roll International Corp. hired the ex-governor because officials there were looking for a "buzz factor" to sell their nuts.

The Chicago Tribune tells us that others the company deemed buzzworthy and who will be included in its ad campaign are Levi Johnston, the sometime boyfriend of Bristol Palin, Wee Man of the Jackass crew, and Snooki from "Jersey Shore."

Presumably Blagojevich's commercial activities will not interfere with his second trial, which is due to begin on April 20, 2011. With a sideshow like that it will be tough for Pat Quinn to get on the front page.

But when you think about it, the people of Illinois could probably do with fewer front page stories about their governors for at least a while.

Dean Reynolds is a CBS News correspondent based in Chicago. You can read more of his posts in Hotsheet here.