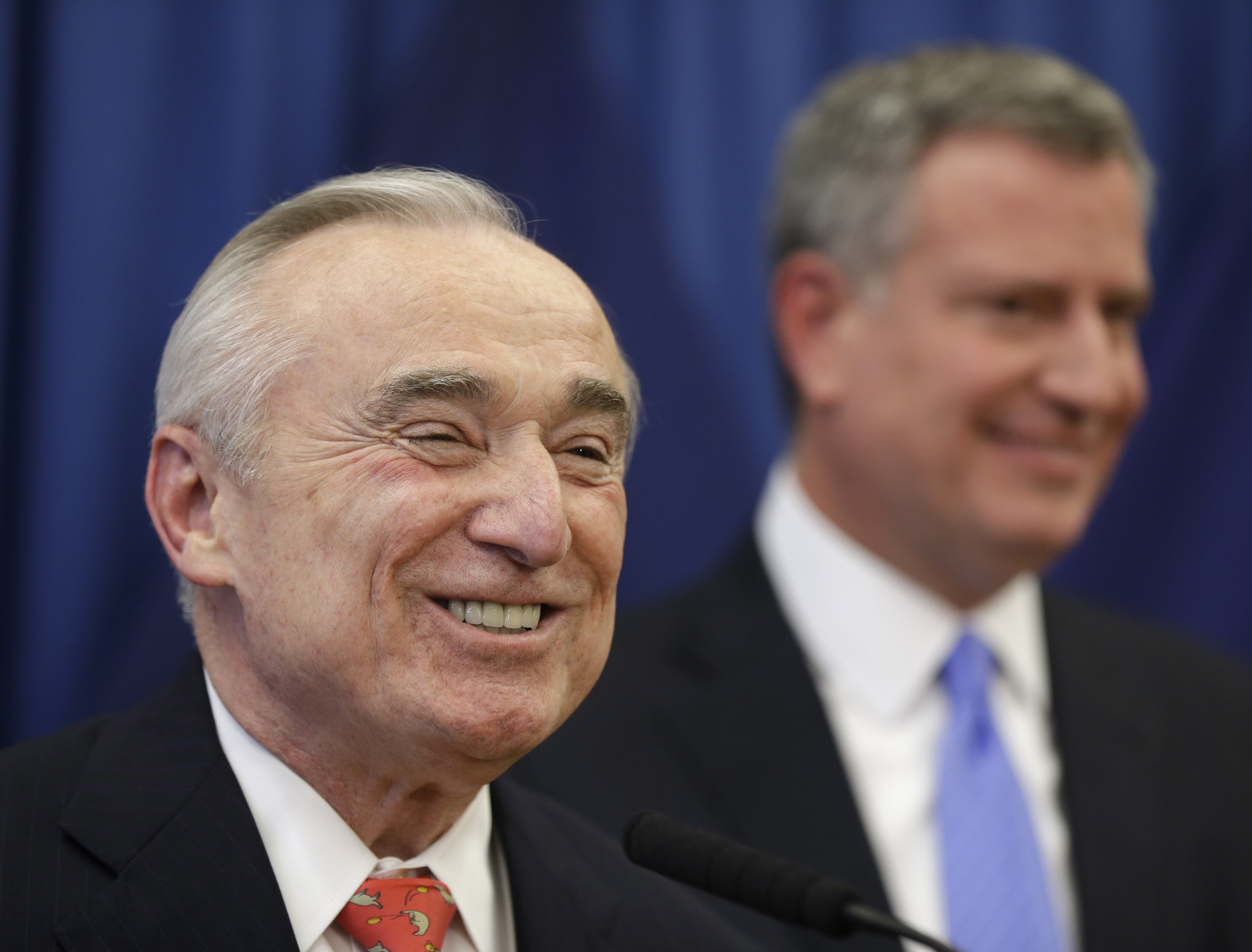 NEW YORK -- William Bratton, whose tenure as New York City police commissioner in the 1990s was marked by a steep decline in crime and clashes with then-Mayor Rudolph Giuliani, has been chosen to lead the nation's largest police force again.

Mayor-elect Bill de Blasio announced the appointment Thursday, saying Bratton is a "proven crime-fighter" who knows how to keep the city safe.

He is being named to lead the 34,000-officer department as it tries to maintain a historic drop in crime and an extensive counterterrorism program, even as its tactics have come under increased scrutiny. Bratton, who has also led the Boston and Los Angeles police departments, will succeed Raymond Kelly, the New York Police Department's longest-serving commissioner.

"Wherever he's gone, there's been a reduction in crime," said de Blasio, a Democrat who takes office Jan 1. "I am choosing the best police leader in the United States of America."

Over and over, de Blasio stressed that Bratton will try to continue the city's record public safety gains while improving police-community relations, which he said he believes have been strained by the police tactic known as stop and frisk.

The tactic allows police to stop anyone believed to be acting suspiciously. Its supporters say it has driven down crime while its critics say it unfairly targets black and Latino men.

The use of stop and frisk surged under Bratton in Los Angeles. The new NYPD head defends its use but has likened it to chemotherapy, saying that it must be utilized in proper doses.

"We have a situation in this city at this time that is so unfortunate," Bratton said. "At a time when police and community should be so much closer together, that there should be a bond of legitimacy and trust between them, it's not the case in so many communities in this city. It's unfortunate. But it can be corrected."

To illustrate his commitment to improving relations with the community, Bratton displayed the children's book "Your Police," which he said he began checking out regularly from the Boston Public Library as a youth.

"I've taken this book everywhere I've ever gone, every department. It's always proudly displayed, because it had such profound influence on me," he said. "On the last page of this book, it reads, 'We must always remember that whenever you see a policeman, he is your friend.'"

Bratton, known for his outsized personality and fondness for the limelight, was police commissioner under Giuliani, a Republican, from 1994 to 1996. Bratton emphasized the broken-windows theory of police work - that criminals who commit small crimes, such as vandalism, also commit more serious crimes.

Bratton also helped spearhead the use of CompStat, a data-driven system of tracking crimes that allows police to better allocate their resources to high-crime areas. The real-time system, which is still used today, "changed the game forever," de Blasio said Thursday.

Crime immediately plummeted under Bratton, but he frequently fought with Giuliani over who deserved credit. He resigned after two years.

Bratton, who had led the Boston Police Department and the formerly independent New York City Transit Police before running the NYPD, was tapped to head another big-city police force in 2002, spending seven years atop the Los Angeles Police Department. He is credited with cleaning up the scandal-plagued department's image, and crime dropped every year he was in office.

He has been working at private security firms since 2009. He was appointed by de Blasio almost 20 years to the day after he was first selected to run the department by Giuliani.

Asked about effective gun control earlier this year, Bratton told "CBS This Morning" that he would expand background screening and also do more to control the behavior of criminals by "making sure they are punished."

"Incremental steps help because they save lives," Bratton said, referencing the Newtown shooting. "I'm an optimist on this issue."

The choice of venue for the announcement, arguably the most important appointment for de Blasio, was intended to reflect a new approach. It was held not at police headquarters or a Manhattan office tower, but at the Red Hook Community Justice Center, a small court in a gritty Brooklyn neighborhood that deals with quality-of-life offenses through alternative means and criminal sanctions.

Many elected officials praised de Blasio's choice, but Bratton's appointment triggered grumbles from some liberals, including Brooklyn councilman Charles Barron, who criticized his use of stop and frisk. Civil rights leader the Rev. Al Sharpton acknowledged he was both an ally and adversary to Bratton during his previous tenure but hopes the leaders can work together "to continue the decrease of violence and crime in our community."

Last year, New York City reported 414 murders, a record low, and this year is on pace to be lower still.

Kelly, who served as commissioner for two years under former Mayor David Dinkins and then 12 years under outgoing Mayor Michael Bloomberg, has been praised as one of the most effective commissioners in the NYPD's history.

Besides overseeing the historic reduction in crime, he dramatically bolstered the NYPD's counterterrorism and surveillance capabilities after the Sept. 11 attacks. The NYPD says it has foiled terror plots but has come under criticism for its surveillance of Muslim communities, revealed in a series of Associated Press stories.

Bratton hasn't commented on the surveillance program. In a statement, Kelly congratulated Bratton on his appointment and said he was confident that the city's "record of safety will continue."