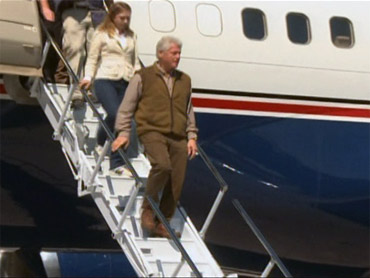 Former President Bill Clinton and his daughter Chelsea arrived in Port-au-Prince, Haiti Monday afternoon on a mission to distribute aid to country devastated by an earthquake centered near the capital nearly a week ago.

Disembarking from the plane at Port-au-Prince's overtaxed airport, the Clintons got straight to work, pulling water and aid shipments from a nearby plane. The pair shook hands with U.S. troops before heading into a building at the end of the runway that houses commanders of the Joint Task Force-Haiti.

Clinton is the U.N. special envoy for Haiti and has been tapped by President Obama to lead a fundraising effort with former President George W. Bush. (When a tsunami killed more than 200,000 in Southeast Asia in late 2004, Bush similarly called on his two immediate predecessors to spearhead fundraising.)

Clinton and Bush on "Face the Nation" Sunday

Clinton is scheduled to visit the country and meet with President Rene Preval during his trip.

She said the U.S. would focus with the Haitian government on communication, electricity and transportation issues, and the two parties agreed to coordinate together to achieve goals. She reiterated President Obama's commitment to be in Haiti "today, tomorrow and in the future."

Secretary of State Clinton is traveling with Dr. Rajiv Shah, administrator of the United States Agency for International Development (USAID).

Speaking to reporters on the flight to Port-au-Prince, Secretary Clinton said the U.S. will support, but not supplant the Brazilian-led U.N. Mission in Haiti (or MINUSTAH), which she said has primary responsibility for security.

"They (MINUSTAH) have been there for years," she said.

Secretary Clinton talks to the Haitian people and President Preval: