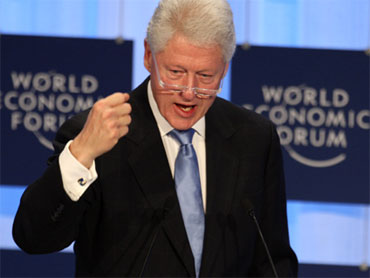 Former President Bill Clinton — his penchant for public speaking unbowed — called Thursday for more help for earthquake-ravaged Haiti, telling the World Economic Forum that the country is determined to escape its troubled past.

"This is an opportunity to reimagine the future for the Haitian people, to build what they want to become, not rebuild what they used to be," Clinton, a U.N. special envoy to Haiti, told this influential gathering of business and political leaders at the Swiss resort of Davos.

Citing a litany of woes — a lack of food, water, even trucks to distribute what aid has arrived — he called for "cash more than anything else." But if anyone had some pickup trucks, Clinton said he could use those too.

The forum is appealing to its wealthy corporate members to pitch in aid but even more importantly, invest for the long term in Haiti.

Elsewhere at the forum, the leaders of South Africa and South Korea urged governments and business leaders to work on keeping the effects of the global financial crisis at bay. But it was Haiti, and hopes for rebuilding the impoverished Caribbean nation, that earned top billing.

Clinton said in the aftermath of the Jan. 12 quake, Haiti's economy could emerge stronger than it was previously, citing Rwanda's economic improvement after its genocide.

Even as Clinton made his appeal, the chair of corruption watchdog Transparency International, Huguette Labelle, warned that donor countries and companies should keep a close eye on where their money is going in Haiti.

"In the first phase you have to get to the people, you have to try to save lives," she told the AP at Davos. "But after that, you have to invest in costly infrastructure projects susceptible to corruption."

"There can be billions of dollars going in to Haiti and the important part doesn't even reach the people, it goes out of the country the minute it goes in," she complained about corruption. "It makes a few people very rich, and the rest stay poor."

Members have donated tens of millions of dollars directly to the aid effort since the disaster earlier this month, said the forum's managing director, Robert Greenhill.

"Businesses are realizing that in addition to their charity role they also have a role in helping to build economies," he told the AP.

Greenhill said businesses should model their rebuilding efforts on those accomplished in the Indonesian region of Aceh, which emerged with a better infrastructure and a stronger economic base than it had before the 2004 tsunami.

"It's by no means a mission impossible," he said, saying Haiti had tremendous tourism potential with sustained investment.

South African President Jacob Zuma touted his country's embrace of democracy since the end of apartheid but noted that to keep South Africa's economic development moving forward, it would need both reform and government intervention.

"You cannot do with one or the other," he said, saying that infrastructure is still needed in the country that will host the 2010 World Cup. "Our economy is a mixed economy."

South Korean President Lee Myung-bak, the first president of that country to speak to the annual Davos gathering, said the G-20 group of wealthy nations would focus on economic recovery ahead of its meeting in Seoul in November.

"The recent financial crisis has reminded us how closely our national economies are integrated in the global economy," Lee said. "It is not only the events in our near neighbors that have an impact on our lives. The degree of integration is now such that we saw how events on the other side of the world can impact our daily lives."

The G-20 is an international body that meets to discuss economic issues. Its members — 19 countries with some of the world's biggest industrial and emerging economies, plus the European Union — represent about 90 percent of the world's gross national product, 80 percent of world trade and two-thirds of the global population.

Brazilian President Luiz Inacio Lula da Silva, meanwhile, had to cancel his trip to Davos because of hypertension and was hospitalized in the Brazilian city of Recife overnight, his office reported. He left the hospital Thursday morning, giving bear hugs to doctors on his way out.

Silva had been set to receive a new "Global Statesmanship Award" at Davos on Friday, the first ever. Brazilian Central Bank President Henrique Meirelles was taking Silva's place at the forum.