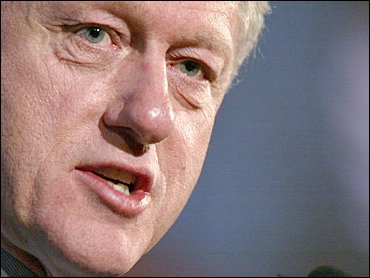 The suspense is over, almost.

Former President Clinton's memoirs will be published in late June, and promotion will begin a few weeks earlier with a speech at BookExpo America, the industry's annual convention.

"It is the fullest and most nuanced account of a presidency ever written, and one of the most revealing and remarkable memoirs I have ever had the honor of publishing," said Sonny Mehta, president and editor-in-chief of Alfred A. Knopf, in a statement issued Monday.

"He talks with candor about his successes, as well as his setbacks, looking at both his career in public service and his life."

The book, for which Mr. Clinton received a reported $10 million to $12 million, will be called "My Life." Knopf is planning a first printing of 1.5 million, a realistic number given the success of "Living History," the memoirs of Sen. Hillary Rodham Clinton.

Nearly 1.7 million copies of the hardcover of "Living History" are in print and a 525,000 first printing was announced for the paperback, which just came out.

If the former president should fail to sell more books than the first lady, he won't be alone. Memoirs by Gerald Ford and Ronald Reagan both proved less popular than those written by their wives.

No precise date has been set for the book, which Mr. Clinton is still completing. Details on the book's length, cover and promotional tour are also being worked out. One event has been scheduled: Mr. Clinton will speak at BookExpo America, which takes place in Chicago from June 3-6. Then-first lady Hillary Rodham Clinton spoke at BookExpo in 1995.

Like Bob Woodward's "Plan of Attack" and Richard Clarke's "Against All Enemies," Mr. Clinton's book will likely make its way into the presidential campaign, especially if the former president defends his record on fighting terrorism.

The book was edited by Robert Gottlieb, who has worked with such Pulitzer Prize winners as Robert Caro, Toni Morrison and Katharine Graham.

But it will be an admittedly hurried production, with Knopf having just two months to convert the manuscript into a finished book, a process that often takes several months.

If Bill Clinton turns out a first-rate memoir, especially about his presidential years, he will be a true path breaker. The only highly regarded presidential memoir is by Ulysses Grant, who devoted the vast majority of the book to his triumphant Civil War military leadership and wrote virtually nothing about his often disastrous presidency.

Most presidential works have the dull, self-serving tone of a prepared speech. They can suffer from the at times impersonal hand of a ghostwriter or from data of strong interest to a particular president - only hinting at a story not really told in the pages of the book. The memoirs of Herbert Hoover, for example, include estimated totals of dried fruit exports and balance sheets on food assistance to Armenia and Lithuania.

Timing and luck have kept some of the more eloquent leaders from telling their stories. Four early, literary presidents - Thomas Jefferson, James Madison and John and John Quincy Adams - never published full-length memoirs largely because it was considered in poor taste to dwell on one's accomplishments.

Abraham Lincoln and John Kennedy were assassinated; Franklin Roosevelt also died in office and Woodrow Wilson finished his presidency in such poor health he never got past the preface of an intended book.