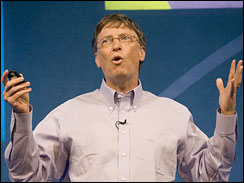 When you're a multi-billionaire, impatient with the sometimes tortured pace of inter-government negotiations, you can always speed things along by cutting a check.

So it was that after the inconclusive results of the Copenhagen Conference, word came that Bill Gates had invested at least $4.5 million into geo-engineering research. The idea: Find a way to reflect solar energy and filter carbon dioxide from the atmosphere.

Now we've got an early look at one such company, which reportedly is developing a way to seed clouds by spraying seawater into the air.

The machines, developed by a San Francisco-based research group called Silver Lining, turn seawater into tiny particles that can be shot up over 3,000 feet in the air. The particles increase the density of clouds by increasing the amount of nuclei contained within. Silver Lining's floating machines can suck up ten tons of water per second. If all goes well, Silver Lining plans to test the process with 10 ships spread throughout 3800 square miles of ocean. Geoengineering, an umbrella phrase to describe techniques that would allow humans to prevent global warming by manipulating the Earth's climate, has yet to result in any major projects.

Armand Neukermanns, who is leading the research, told the Times Online that whitening clouds was "the most benign form of engineering" because, while it might alter rainfall, the effects would cease soon after the machines were switched off.

New York Times: How to Cool a Planet (Maybe)

Not everyone buys that idea and the question of geo-engineering has predictably been marked by controversy. In a statement marking the opening of a UN conference in Nairobi this week, Jim Thomas of ETC Group, one of the founding organizations of an anti-geo-engineering campaign, criticized the idea and called for a global moratorium on geo-engineering.

"We knew Microsoft was developing cloud applications for computers but we didn't expect this," he said. "Bill Gates and his cloud-wrenching cronies have no right to unilaterally change our seas and skies in this way. A global moratorium on geoengineering experiments just became a whole lot more urgent."

On a less controversial topic, Gates has also been making news with his latest round of funding for projects designed to improve health in the third world. The Bill & Melinda Gates Foundation today announced a fourth round of $100,000 grants to "creative projects that show great promise to improve the health of people in the developing world,"

Update A PR representative from Edelman later sent me this note from Ken Caldeira ofthe Carnegie Institution for Science: "Bill Gates made a grant to the University of Calgary to support research in possible unique solutions and responses to climate change. Administrating this research funding, David Keith of the University of Calgary and I made a grant to Armand Neukermanns for lab tests to investigate the technical feasibility of producing the fine seawater sprays required by the Latham cloud whitening proposal, one of many proposals for mitigating some of the adverse effects of climate change. This grant to Neukermanns is for lab tests only, not Silver Lining's field trials."