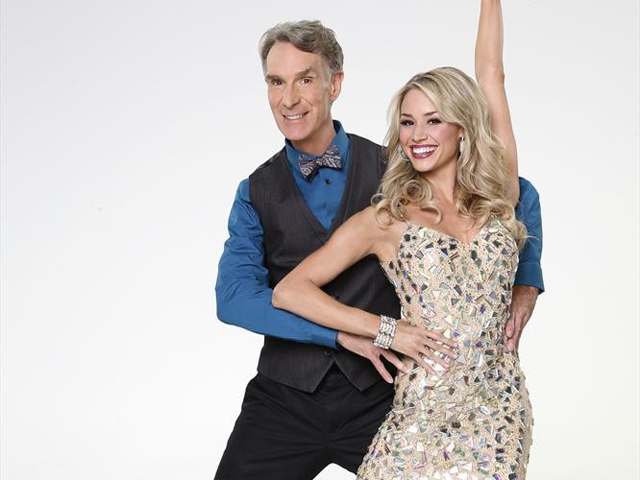 "Dancing with the Stars" had a bevy of Hollywood-themed performances on Monday, but the episode was also the end of the road for everyone's favorite "Science Guy."

Bill Nye returned to the dance floor despite suffering an injury last week. He and partner Tyne Stecklein performed a fun, robot-themed jazz number that worked around his limited mobility, but only earned them a score of 16 out of a possible 30 from the judges.

After learning they were in jeopardy along with Christina Milian and Mark Ballas and Brant Daugherty and Peta Murgatroyd, Nye and Stecklein were the eliminated couple this week.

"What breaks my heart is Tyne not being able to stay in [the competition]," Nye said of his partner. "She's fantastic."

As for the other competitors, the night's highlights included Corbin Bleu and Karina Smirnoff dancing a quickstep that judge Bruno Tonioli called "one for the record books," and Daugherty and Murgatroyd earning the night's top score (27/30) for their quickstep routine.

Bill Engvall was praised for a Lone Ranger-themed paso doble that earned him and Emma Slater a score of 24, and Nicole "Snooki" Polizzi also showed improvement with her and Sasha Farber's 25-point quickstep.

Here's the breakdown of how everyone scored:

Tell us: Were you sad to see Nye go?