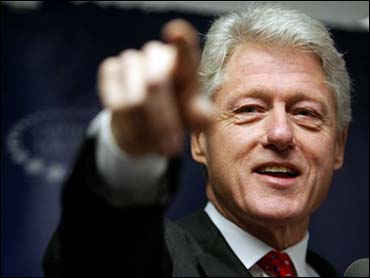 Former President Clinton says it's "sad" that a Republican political consultant who married his male partner is raising funds to defeat Sen. Hillary Rodham Clinton. But an associate says there's nothing wrong with being gay and Republican.

Mr. Clinton said Monday there might be "some sort of self-loathing" for Arthur Finkelstein, the longtime GOP operative who helped Gov. George Pataki unseat Democrat Mario Cuomo in 1994.

Finkelstein told The New York Times last week that he had married his partner of 40 years in Massachusetts, saying he believes "visitation rights, health care benefits and other human relationship contracts that are taken for granted by all married people should be available to partners." The marriage took place in December.

Finkelstein is lining up donors to help raise $10 million for a "Stop Her Now" committee to defeat the senator's 2006 re-election effort. New York magazine first reported Finkelstein's "Stop Her Now" plan in February, and a GOP operative speaking on condition of anonymity confirmed the account to The Associated Press at the time.

At a news conference Monday about his foundation's AIDS initiatives, the former president was asked whether the anti-Hillary efforts made him angry.

"Actually, I was sort of sad when I read it," he said.

"I thought, one of two things. Either this guy believes his party is not serious and is totally Machiavellian in its position, or you know, as David Brock said in his great book 'Blinded by the Right,' there's some sort of self-loathing or something. I was more sad for him."

In the book Mr. Clinton was referring to, the formerly conservative Brock says that when he attacked the left he was expressing his own gay self-hatred.

Kieran Mahoney, a GOP consultant who has worked with Finkelstein, said Mr. Clinton was "engaging in pretty basic stereotyping by suggesting that because somebody's gay they have to be a Democrat."

The national Republican Party has taken an aggressive stance against gay marriage, with President Bush endorsing a constitutional ban on same-sex marriage.

Asked about his wife's possible presidential ambitions, Mr. Clinton said, "Whatever she wants to do I'm for her, but we should deal with the matters at hand," referring to issues before Congress and her re-election plans.