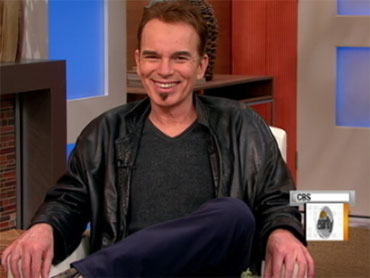 Oscar-winner Billy Bob Thornton is always in demand in Hollywood.

The versatility of the acclaimed actor, director, screenwriter - and musician -- also shines through in the variety of roles he's taken on, in movies such as "Monster's Ball," "Armageddon" and "Friday Night Lights."

In the new action film "Faster," Thornton plays a veteran police officer hot on the trail of a killer.

His character chases a revenge-seeking murderer played by Dwayne Johnson.

"People see a guy like him, and he's so big and everything, and they think he's intimidating. (Bit) that's the nicest guy I think I've ever worked with," Thornton told "Early Show" co-anchor Maggie Rodriguez.

He explained that he didn't do too many scenes with Johnson, because of the "cat-and-mouse thing going on" as the movie unfolds, but, "We do have some stuff together. And it was terrific. And Dwayne does a great job in it."

That ambiguity, Thornton says, makes it easier to portray "Cop."

"You learn a lot about the character's past," he says, "just because the script was written in such a way to give you that information. But, in this case, it was really nice to be a bit ambiguous. I'm attracted to roles like that, anyway. And I'm playing a guy who also, his life's kind of gone down the wrong path. He's a cop, but he's kind of tired, ready to get it over with and rejoin his estranged family and that kind of thing. And that attracted me to it, also. That type of character."

Thornton says he loves wearing many Hollywood hats, "So I'll probably keep trying to do that. I mean maybe, you know, once you, God willing, you get up in your 80s or 90s you can, you know -- I always thought it would be nice to retire on a television show like Peter Boyle was on with his show ("Everybody Loves Raymond"), you know, just kind of sit in a chair and like make a comment every now and then."

Thornton's even taken on another role - that of producer - of a documentary on Willie Nelson, whom he says is "a huge influence" on him. "He's one of the greatest songwriters around," Thornton observed to CBS News. "He's influenced most songwriters out there. I've known Willie a long time. The film is a backstage look at his family, band, and road crew. We're finishing it up now and hope to get it on the festival circuit next year."

And, lest anyone think Thornton's other roles are on the backburner, he tells CBS News he "just finished a script with Tom Epperson, who I wrote a couple of films with in the past. We're now going the financing route, which is very difficult in this day and age. The plan is for me to direct it."

"Faster" makes its way to theaters nationwide on Wednesday Nov. 24.
ou've also produced a documentary on Willie Nelson. Has he been a big influence on you