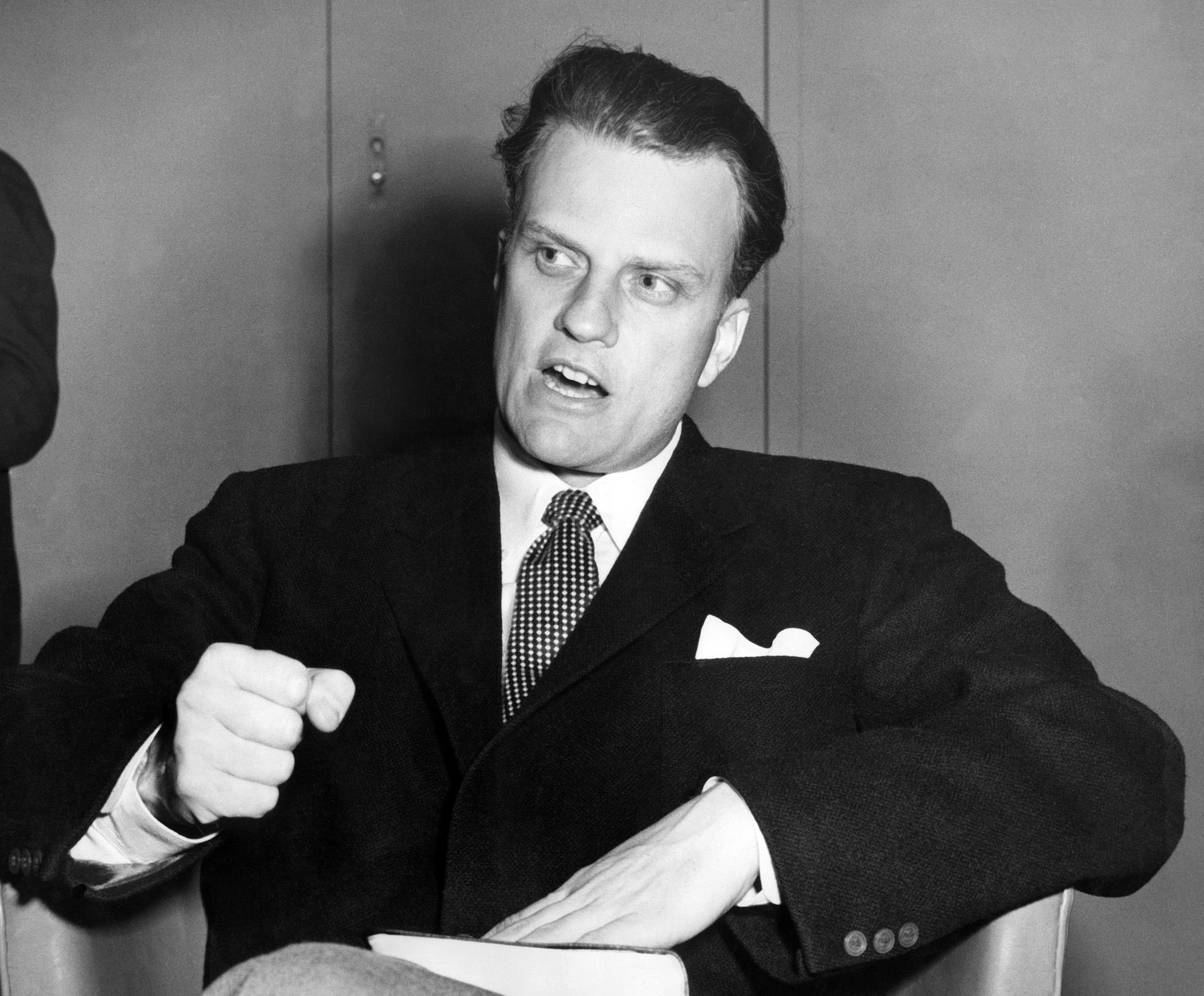 The Rev. Billy Graham, whose sermons were broadcast in churches around the country, died Wednesday morning at his home in Montreat, North Carolina, his nonprofit organization announced. He was 99.

"The GREAT Billy Graham is dead," Mr. Trump said. "There was nobody like him! He will be missed by Christians and all religions. A very special man."

Pence said he and his wife Karen were saddened by the news.

"We send our deepest condolences to the Graham family," the vice president said. "Billy Graham's ministry for the gospel of Jesus Christ and his matchless voice changed the lives of millions. We mourn his passing but I know with absolute certainty that today he heard those words, 'well done good and faithful servant.' Thank you Billy Graham. God bless you."

In the summer of 2005, Graham preached at what he called his "Final Crusade."

"When I touch the podium, I can feel a new strength and a new power come and it's a thrilling thing for me to preach the gospel at this age," Graham said.

The three-day event in New York City was the culmination of a lifetime of evangelism -- seven decades of spreading the gospel to more than 200 million people in 185 countries around the world.

Graham once said: "Jesus Christ, the son of God, has an answer to every problem that you face!"

Raised in the fundamentalist faith of his native North Carolina, Graham dedicated his life to Christ when he was 16, and was ordained a Baptist minister in 1939. He created his own brand of populist evangelism. His "crusades," as he called them, were soon attracting millions in person and later through television.

"We are united, and are ready to march under the banner of almighty God, taking as our slogan that which we have on our coins, 'In God We Trust,'" Graham once said.

Before long, Graham set his sights on the rest of the world, and took his "crusades" to Europe, Africa, India, the Far East. A staunch anti-communist, one of his cherished ambitions was to bring the gospel message to the officially atheist countries behind the Iron Curtain.

"I would say 80 to 90 percent of the Russian people believe in God. And they've had communism now for all these many years, but it-- they still believe in God," Graham said.

Graham's wife, Ruth, the daughter of medical missionaries, was raised in China. In 1988, the Grahams traveled there to encourage its fledgling Christian community.

Graham became a counselor and confidante to every American president from Harry Truman to Barack Obama, but Graham himself denied he had a role in making policy. He said: "I don't advise them, I pray with them."

He blessed their inaugurations, dedicated their libraries and presided over their funerals.

"You know, few events touch the heart of every American as profoundly as the death of a president. For the president is our leader. And every American feels that he knows him in a very special way," Graham said.

Graham's friendship with Richard Nixon dated back to the early 1950s, but it was tested by the Watergate scandal and the release of secretly recorded White House tapes.

"I'd never heard him use any of those words. I didn't know he knew them, some of them that came out on the tapes," Graham said.

Despite his proximity to power, Graham was resolutely nonpartisan, fearing that political favoritism would damage his ministry -- a ministry that was never touched by the kind of scandal that destroyed those of televangelists like Jim Bakker and Jimmy Swaggart.

Graham's ethics and his emphasis on cooperation among different faiths earned him widespread respect.

In moments of national crisis, such as the Oklahoma City bombing, Graham was sought out for his ability to comfort and console with simplicity and eloquence.

"We've been reminded that a cruel event like this, which so vividly demonstrates the depths of human evil, also brings out the best of us," Graham said.

Former presidents honored Graham by attending the dedication of his library in North Carolina.

It is there that he will be laid to rest alongside his wife, Ruth. They were married 64 years. At her funeral he said, "We were called by God as a team."

Graham looked ahead to the end of his life with enormous faith.

Graham said: "I've been asked so many times lately, do I fear death? No! I look forward to death, with great anticipation. I'm looking forward to seeing God face to face."