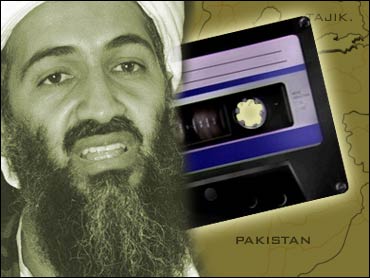 Intelligence analysts are 95 percent certain that a new tape attributed to Osama bin Laden is the real thing, reports CBS News National Security Correspondent David Martin. The tape is still being electronically analyzed on the slim possibility it was doctored, but there is little doubt the tape proves bin Laden is still alive and dangerous.

President Bush said Wednesday that he was taking the tape "very seriously," but will leave it to others to determine the tape's authenticity.

He warned, though, that "whoever put the tape out has put the world on notice yet again that we're at war."

Experts who've examined that audio message said they're nearly sure it is bin Laden's voice.

The speaker on the tape refers to recent terrorist strikes U.S. officials believe are connected to al Qaeda. He also threatens new terrorism against the United States and its allies, and he castigates U.S. policy toward Iraq.

"Assuming it is in fact authentic, it is an effort to boost morale among the rank and file," one intelligence official said. "It is an effort to show members of al Qaeda that top leadership is still around. It could also signal future attacks."

The reporter who got the tape for an Arab television network said it was given to him in Pakistan, where many of al Qaeda's top leaders are believed to be hiding.

Ahmad Muaffaq Zaidan of Al Jazeera TV said a bin Laden emissary called him by phone Tuesday and asked to meet in Islamabad later that night.

Zaidan said the man's face was half covered, but he believed that about two months ago, the same man arranged a similar drop-off and handed him another tape allegedly made by bin Laden. Zaidan declined to provide further details about the man that might help identify him.

In the most recent meeting, Zaidan said, "He only gave me the cassette, and in half a minute he disappeared."

The man would not answer any questions about the tape, and he only said, "This is from bin Laden," Zaidan added.

President Bush discussed the tape Wednesday morning with congressional leaders, telling them it's "timely," reports CBS News Correspondent Peter Maer. Officials said it was no coincidence the tape was released as the United States turned up the pressure on Iraq to comply with a new United Nations resolution on disarmament.

Mr. Bush told reporters, "We'll take the warning very seriously." He said the tape proved that "there is an active enemy that continues to hate, that is willing to use murder as a way to achieve their goals."

Meanwhile, sources tell CBS News the FBI is interrogating a well-known Pakistani physician who reputedly served as bin Laden's doctor. Dr. Amir Aziz is reportedly being held by Pakistani secret police and questioned by the FBI. They hope he may be able to shed some light on the allegedly frail state of the terrorist leader's health, as well as on the inner workings of Al Qaeda.

Military officials, who have led the yearlong hunt for the al Qaeda chief in Afghanistan and elsewhere, said they view the tape as the first independent proof in nearly a year that bin Laden is alive.

Confirmation that bin Laden is alive could pose problems for Mr. Bush, underscoring to an anxious public that the war on terrorism is far from over.

The tape is addressed to "peoples of the countries allied with the tyrannical U.S. government" and specifically mentions Britain, France, Italy, Canada, Germany, Australia and Israel, according to a U.S. government translation provided to The Associated Press.

Recent statements from al Qaeda leaders have led U.S. and European leaders to warn of possible new attacks, particularly against railroads and oil and gas interests. A law enforcement official said Tuesday that "chatter" among suspected terrorists has reached the level seen before the Sept. 11 attacks.

The tape seems to have been made in the past two weeks. The speaker appears to refer to the killing of a U.S. diplomat in Amman, Jordan, on Oct. 28, the most recent event noted in the transcript. Whether bin Laden or al Qaeda had a direct hand in the attack is unknown, U.S. officials said.

The speaker also praises six terrorist attacks by suspected Islamic militants between April and October, including the bombing of a nightclub in Bali, Indonesia, on Oct. 12, that killed nearly 200 people, and the Chechen takeover of a theater in Moscow in late October.

The voice also gets personal, attacking not only Mr. Bush, but calling Rumsfeld "the butcher of Vietnam" and comparing Vice President Dick Cheney and Secretary of State Colin Powell to marauding Mongols.

The last hard evidence bin Laden was alive surfaced late last year. A videotape recovered by U.S. forces in Afghanistan showed him having dinner with some of his deputies on Nov. 9, 2001.

Late in December, another tape of bin Laden giving a statement aired. He appeared gaunt and possibly wounded. The references in the tape suggested it was filmed in late November or early December, but officials could not be certain.