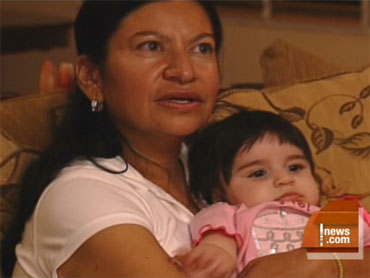 A British woman who married a son of Osama bin Laden says the couple are divorcing because of opposition from his family, The Sun newspaper reported Wednesday.

Jane Felix-Browne, a 51-year-old grandmother from Moulton, a village in northwestern England, married Omar bin Laden, 27, in both Egypt and Saudi Arabia in April.

But Felix-Browne said, according to The Sun, that bin Laden's family members feel they have been humiliated. The newspaper quoted her as saying her husband had been threatened in a telephone call, but she did not identify the caller or give details about the threat.

"Omar was told he shouldn't be married to me, and there was a very good chance he would be taken to prison," The Sun quoted her as saying. "Omar knew who it was on the phone, but he wouldn't tell me. After the call he said he felt both our lives were in jeopardy."

She could not be reached for comment Wednesday morning.

"People are opposed to my marriage because I am British. I wasn't prepared to see the man I love die," she was quoted as saying.

"It was a really, really good marriage, a strong marriage. But I cannot stand by and watch my beloved husband die before my very eyes.

"The bin Laden family are afraid of the political implications of a British woman being married to the son of Osama bin Laden. They fear embarrassment and complications, not just in their own country but also in Britain and America," Felix-Browne was quoted as saying.

The Sun quoted Omar bin Laden also as saying "this marriage is now over."

"I don't want a divorce, but there are serious reasons for this breakup that I can't talk about," The Sun quoted him as saying.

"I adore being with this woman. But we can't stand up when the waves from the sea are coming to wipe us out."