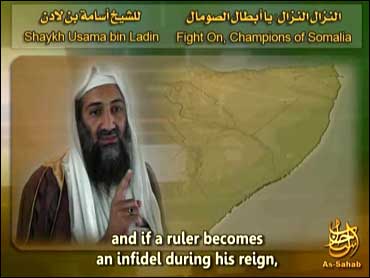 Al Qaeda leader Osama bin Laden has warned in a new audio message that if the United States executes the accused mastermind of the Sept. 11 terror attacks it will be, "a decision to execute any of your people that we take prisoner."

U.S. officials are still reviewing the tape, reports CBS News Correspondent Bob Orr. Sources say there is no reason to doubt the tape's authenticity; however his threats are not new, Orr reports. Bin Laden has been calling for the killing of Americans for more than a decade, and al Qaeda has already killed U.S. prisoners including journalist Daniel Pearl.

AlJazeera aired excerpts from the tape Thursday, without releasing the full audio. It was not immediately clear how the network obtained the audio, but al Qaeda's media wing has handed over propaganda audio and video to them before.

"My message to you is about our prisoners in U.S. custody," bin Laden says in one of the excerpts aired by AlJazeera.

"Your leader appears to be following in the footsteps of his predecessor. The White House has announced that it will seek to execute the hero Mujahid, Khaled Sheikh Mohammed, and his companions," says bin Laden. "The day the U.S. takes such decision, it's as if it's taken a decision to execute any of your people that we take prisoner."

Those words echo a similar threat made in 2006 by the terror organization's No. 2 Ayman Zawahiri.

"I tell (then-President George W.) Bush … what you have perpetrated against Khalid al-Shaykh Muhammad and the other Muslim captives in your prisons and the prisons of your slaves in Egypt, Jordan, Pakistan and elsewhere is not hidden from anyone," Zawahiri said. "We are a people who do not sleep under oppression and who do not abandon our revenge until our chests have been healed of those who have aggressed against us."

CBS News National Security Analyst Juan Zarate said the tape appears to be an effort by bin Laden to inject himself into the U.S. political controversy over the pending trials of Guantanamo detainees, including Khalid Sheik Mohammed. The Obama administration has yet to decide if Mohammed and his 9/11 co-defendants will be tried in civilian or military courts.

Zarate also said bin Laden is trying to remain relevant in the Muslim world where he has suffered a general loss of support.

"It's the height of absurdity for anyone associated with al Qaeda to even suggest that - now, at long last - they're going to start treating captives badly," the counterterrorism official said. "They may have forgotten Danny Pearl and all the others they've slaughtered, but we haven't. If this is bin Laden and he wants to weigh in on legal proceedings involving 9/11 conspirators, I challenge him to show up in court to make his case. Frankly, that's about all the comment this deserves."

Bin Laden also criticized the Obama administration's support of Israel, which has been tense in recent days after the Israeli government announced its plan to build settlements in east Jerusalem.

"The masters of the White House have been perpetrating their injustice upon us, and they still do, especially through their support to Israel in its occupation of our land in Palestine," bin Laden says later in the video. "They thought that America, far beyond the oceans, is safe from the reprisal of the oppressed. Until the answer came, loud and strong, in the heart of your home, on the 11th of September with the grace of Allah."

"Wise is he who gains wisdom from others," the Qaeda leader says. "It is only fair to treat and be treated on equal footing, and war one day goes for you and another day against you."