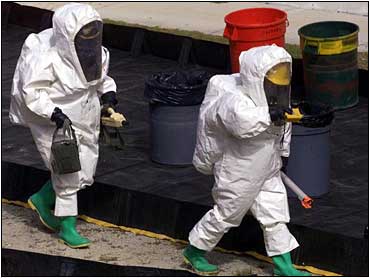 As the Pentagon girds for possible military action against Iraq, it is having problems providing U.S. troops with state-of-the-art protective gear against chemical and biological attacks, according to lawmakers from both parties cited in the Washington Post's Saturday editions.

The lawmakers' worries have been buttressed by the General Accounting Office, which recently reported "continuing concerns" about equipment, training and research. The GAO said that for six years, "we have identified many problems in the Defense Department's capabilities to defend against chemical and biological weapons and sustain operations in the midst of their use."

Rep. Christopher Shays (R-Conn.), chairman of the Government Reform Committee's national security subcommittee, told the Post the latest problem Pentagon officials uncovered involves gas masks that have the wrong gaskets and will require extensive inspections to ensure that they are functioning properly.

Shays said he is also concerned about the Defense Department's inability to manage millions of protective suits so that units likely to deploy to the Persian Gulf receive the highest-quality gear, with 250,000 defective suits unaccounted for in the Pentagon inventory.

"I visited the troops in Europe, who I believe will be first responders in Iraq, and they did not have the best equipment we have, and that is a concern to me," Shays said. "We don't know where some of our best suits are -- they are God knows where. And in some cases, we've mixed bad inventory with good," the newspaper quotes Shays as saying.

Raymond Decker, the GAO's director of defense capabilities and management, said he was not convinced that the Pentagon had enough new, highly protective, lightweight suits to equip all forces likely to fight a war in Iraq.

With the new suits in relatively short supply, Decker said to the Post, the Pentagon must rely on millions of older suits manufactured since 1989. But the quality of those charcoal-lined garments, he said, diminishes with age.

A Capitol Hill source, who asked not to be named, said recent Pentagon tests had revealed that the older suits are good for only a day or two after they are removed from their protective packaging. If additional testing turns up similar results, the Post source said, "they've got a big problem."

The GAO told Shays's subcommittee in October that the Pentagon could not locate 250,000 defective suits manufactured since 1989 by a New York company called Isratex, whose officers have been convicted of intentionally providing the military with defective garments. An additional 530,000 defective suits produced by the firm have been located and removed from military stocks.

In a letter sent Wednesday to Defense Secretary Donald Rumsfeld, a member of Shays's subcommittee, Rep. Janice D. Schakowsky (D-Ill.), cited "extremely troubling" testimony by his subordinates on chemical and biological preparedness, particularly with regard to the 250,000 defective suits still missing, the Post points out.

The threat to U.S. forces is particularly acute as the Bush administration puts the finishing touches on invasion plans to topple Iraqi President Saddam Hussein if his government does not relinquish its nuclear, chemical and biological weapons and fully cooperate with U.N. weapons inspectors.

The CIA says Iraq most likely has stockpiled "a few hundred metric tons of chemical warfare agents," including the nerve agents VX, sarin, cyclosarin and mustard gas, and also possesses anthrax and other lethal biological agents that could be weaponized.

Iraq did not use chemical or biological weapons against U.S. forces during the Gulf War, even though Hussein ordered commanders to fill Scud missile warheads, bombs and artillery shells with chemical agents. But many analysts say Hussein and his most loyal commanders will not hesitate to use them in another war, because this new military campaign would be for the explicit purpose of toppling Hussein's government.

Anna Johnson-Winegar, the Defense Department's deputy assistant secretary for chemical and biological defense, told the Post she believed the Pentagon would be able to reach a "goal" for providing all troops sent to the Gulf with the new protective suits, officially named the Joint Service Lightweight Integrated Suit Technology, or JSLIST, suits.

Johnson-Winegar also said recent tests had given defense officials "complete confidence" in the protective capabilities of the JSLIST suits and the older garments.

Retired Army Gen. Barry McCaffrey, who commanded the 24th Infantry Division during the Gulf War and is under Pentagon contract to brief the commanders of units likely to deploy on what to expect in any military action against Iraq, said he believed that U.S. forces were well prepared for chemical or biological attacks.

"Every fighter wing, every Navy ship at sea, every Army battalion is fully equipped to fight in a chemical environment," McCaffrey said to the Post. He underscored the threat last month when he told commanders of the 3rd Infantry Division at Fort Stewart, Ga., that they should expect to be attacked with chemical weapons.

The U.S. military's preparedness for chemical and biological warfare has greatly improved since the Gulf War, when 100,000 troops were exposed to trace levels of sarin nerve gas when engineers blew up sarin-filled rockets at a munitions dump in Khamisiyah in March 1991, the Post reports.

In addition to the new protective suits and masks, U.S. forces are equipped with armored M-93 Fox vehicles that detect mustard gas and nerve agents on the battlefield in less than a second, sounding alarms that give soldiers time to climb into protective suits, masks, boots and gloves. Military units also surround their bases with M8 alarms to detect the presence of nerve agents.

The Pentagon has also recently installed 52 stationary biological sensors called Portal Shield in Qatar, Saudi Arabia, Oman, the United Arab Emirates and Bahrain to complement a mobile biological sensing system towed by a Humvee that is designed to patrol the battlefield and provide early warning of a biological attack.

But unlike chemical sensors, biological sensors take as long as 20 minutes to detect the presence of germ weapons, greatly increasing the risk that soldiers would be exposed to biological agents before donning their protective gear.

One difficulty in assessing the Pentagon's readiness in the chemical and biological arena is that much information about the protective qualities of the new equipment remains classified, the Post explains.