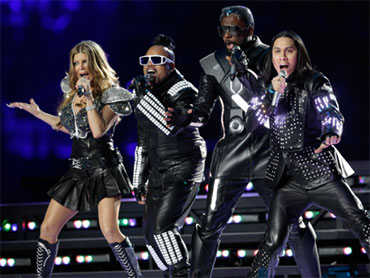 On second thought, maybe Usher should have been the headliner for the Super Bowl halftime show.

The superstar had only a brief cameo in the showcase, but his tightly choreographed moves and acrobatics marked the brief exhilarating moment of a surprisingly stale medley from the normally frenetic headliners, the Black Eyed Peas.

The Super Bowl performance was arguably the biggest stage yet for the quirky quartet, whose fusion of pop, dance and hip-hop have made them global superstars. But in the massive Cowboys Arena, the group appeared to be as stiff as frontman will.i.am's plastic hair hat.

It started out with a wow factor: will.i.am, Taboo, Fergie and apl.de.ap descended from atop the stadium, outfits glittering, bedazzled outfits, singing (with the help of auto-tune) the party anthem "I Gotta Feeling" with hundreds of dancers grooving in step on the field.

But the Peas didn't match the energy of the song; they seemed tentative, and tense. It didn't help that Fergie's mic didn't kick in until she was midway through her first verse.

If the explanation for the Peas' flatness was nerves, those nerves never settled, as they plodded through such songs as "Pump It" and "Boom Boom Pow." Technically, they were fine - Fergie's voice soared, the raps were performed right. They didn't excite. Even former Guns `N Roses guitarist Slash seemed bored as he joined Fergie for a short snippet of "Sweet Child O' Mine," an unnecessary cameo that failed to add any sizzle to the set.

So it fell to Usher to breathe some life into the halftime show, and he didn't disappoint as he appeared in all white with a flank of dancers. Although Usher seemed to dance more of his No. 1 hit "OMG" with will.i.am than sing it, his syncopated moves and flips provided the energy jolt that the Peas lacked.

Even after Usher left, the Peas seemed a little more alive. They went back in their catalog and performed early hit "Where Is The Love," which segued to their latest "The Time (Dirty Bit)," an odd, dance reworking of "(I've Had) The Time of My Life" from the movie "Dirty Dancing." They ended as they began, reprising "I Gotta Feeling."

The choice of the Black Eyed Peas was intended to bring some youthful vigor back to the halftime show after the NFL - feeling burned by the infamous "wardrobe malfunction" of Janet Jackson with the aid of Justin Timberlake in 2004 - chose a string of safe, near-geriatric icons for the halftime for the next six years, ending on a low note with a much-maligned concert by The Who last year.

The Black Eyed Peas brought the youth, but little else. "I Gotta Feeling" the NFL will be looking to try and find a better balance in time for Indianapolis next year.