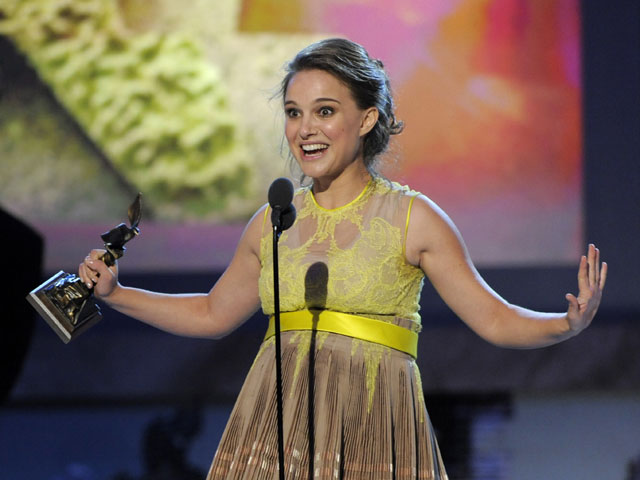 James Franco was picked as best actor for the survival story "127 hours," while the Ozarks crime story "Winter's Bone" earned both supporting-acting prizes, for John Hawkes and Dale Dickey.

All three films are up for best picture at Sunday's Academy Awards, where Portman is considered the favorite to win the best-actress Oscar and Franco is a co-host alongside actress Anne Hathaway.

With plenty of overlap among nominees at the Oscars, the Spirit Awards are a warm-up for Hollywood's biggest party.

The British monarchy saga "The King's Speech," the best-picture front-runner at the Oscars, won the prize for best foreign film.

Portman and Aronofsky joked about the difficulty in getting "Black Swan" off the ground, with cash tight and few people believing the film could ever make its money back.

"My ballet teachers were, like, every day, `So when do we get paid?"' said Portman, who won for her role as a ballerina losing her grip on reality.

Aronofsky thanked his financial backers for believing in the film. "Now, they're (expletive) rich," Aronofsky said of the money men behind "Black Swan," a $100 million hit.

Aronofsky said he has been blessed with fearless actors in all of his films and had gushing praise for Portman.

"To have this incredible performer give you everything she's got and then train for a year. I'll always be in debt to Miss Natalie Portman," Aronofsky said.

Franco, in film school at New York University when the "127 hours" script came his way, said he was inclined to pass except for the insistence of his manager, agent and publicist, who told him it was a film he had to do.

"I just finished my thesis film, so independent film is something that's a very, very big part of my life and very important to me, so this means a lot," said Franco, who stars as real-life adventurer Aron Ralston, who cut off his arm after he became trapped by a boulder in a canyon.

"The King's Speech" director, Tom Hooper, said he has not been following Oscar predictions but confided backstage that he was jittery about the awards show coming a day later.

"I think anyone would be not in their right mind at the prospect of making a speech in front of half a billion people," Hooper said.

"Winter's Bone" co-star Hawkes thanked the film's crew, advising the crowd to "look them up and hire them for your films." He also thanked director Debra Granik, whom he called the "best of the best," and the break-out star of "Winter's Bone," Jennifer Lawrence, who lost best actress to Portman but also is nominated at the Oscars.

"I can't wait to see what the future holds for you, Jen," said Hawkes, who plays Lawrence's menacing but ferociously protective uncle.

In "Winter's Bone," Dickey co-stars as a member of a close-knit crime clan in the Ozarks. She thanked the people of Missouri, where the film was shot, for opening "their hearts and land," and said she hoped the role might land her fresh work.

"I'm getting some more auditions than I had before," said Dickey, best-known for her comic role as the daytime hooker on TV's "My Name Is Earl." "The residual trickle-down is hopefully, I'll get more work. If I get more work, I'm a happy chick."

The graffiti-art examination "Exit Through the Gift Shop" won the documentary prize, for which it also was in the running at the Oscars. Elusive British street artist Banksy, the film's director who keeps his identity secret, was not in sight.

Thierry Guetta, a Frenchman who appears in the film and is part of the street-art movement, accepted the award and was asked the inevitable question backstage: Where's Banksy?

"I don't know. Maybe somewhere here," Guetta said, and speculated about whether Banksy might turn up at the Oscars. "Tomorrow is another day. Maybe he's somewhere around. Maybe he's sitting next to you, not too far away."

The lesbian-family tale "The Kids Are All Right" took the screenplay award for Stuart Blumberg and Lisa Cholodenko, who are nominated for best original screenplay at the Oscars.