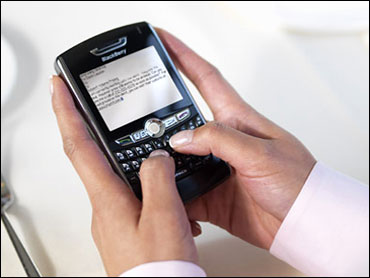 Most of it happened outside "work" hours, but the nature of mobile e-mail meant plenty of dismay as BlackBerry service went down across North America from Tuesday evening to Wednesday morning.

By the time the service sputtered back to life, jamming the handheld devices with a torrent of delayed messages, grumbles had been heard from the Canadian Parliament to the executive suite at JPMorgan Chase & Co.

"We all lost our data when we were in the House of Commons last night. The sound of BlackBerrys being thrown against the desk was deafening for a while," said Garth Turner, a Liberal Member of Parliament known for his constant Internet blogging.

"Because it has become the de facto channel of communications around this place, it actually impacts on the government of Canada and the work of the whole House of Commons."

Research in Motion Ltd., the Canadian company that provides the devices and e-mail service, confirmed the outage Wednesday morning, but disclosed no details about the cause.

The outage cut off incoming and outgoing e-mail on BlackBerry devices regardless of which cellular company a user buys the service from, indicating the problem originated at RIM's network data center in Canada.

That facility serves as a hub for RIM's North American traffic, routing messages between the roughly 8 million BlackBerry devices now in use and the various sources of e-mail, from private corporate servers to Web-based accounts like Yahoo and AOL.

CBS News technology consultant Larry Magid says the BlackBerry is an obsession for some people, but for many it is a necessity.

"People sometimes refer to the BlackBerry as 'CrackBerry' as if people are addicted to it, and many people are. [But] a lot of people are not desk-bound and as they go about their day — whether they're traveling or even in the office — they turn to their BlackBerry constantly to make sure they're keeping up with their latest messages."

"I actually know people who never check e-mail on their personal computer," Magid said. "They only use their BlackBerry because it's so convenient to have an e-mail system that they can carry around with them in their pocket."

The outage reverberated on Wall Street, too. RIM's share price slid at Wednesday's open, but recovered and rallied, suggesting, perhaps, that a product that can provoke this much consternation holds an enviable position against emerging challenges from the likes of Microsoft Corp., Motorola Inc. and Nokia Corp.

BlackBerry outages have been rare, although minor glitches occasionally cause delays in RIM's ability to deliver e-mail in real-time, perhaps the most important feature of the service for many users. The last two major disruptions appear to have occurred nearly two years ago, both in June 2005.

Nevertheless, even one outage is unbearable for some. While many people rely heavily on the device as a lifeline when they're away from their computers, even more have simply grown accustomed, occasionally obsessive, about being able to check their e-mail at night and on weekends.

"It's been most inconvenient," said Dacrie Brooks, a public relations professional attending the annual convention of the National Association of Broadcasters in Las Vegas. "I've been using (my BlackBerry) for all my communications because I don't have access to my laptop between meetings."

"It's been a challenging day because I'm missing things left and right. That's not fun."

The outage also was mentioned Wednesday morning during a conference call with the chief financial officer of JPMorgan, Michael J. Cavanagh, to discuss the bank's quarterly earnings, with the CFO noting that his device was still on the blink.

Other users shrugged at the disruption.

"My life wasn't affected in any serious way by the outage," said Dimitri Vorontzov, a courtship instructor for the personal coaching service Charisma Arts, noting that he's usually near a computer to fetch his e-mail anyway. "If you didn't tell me, I wouldn't have really noticed."

At least 13 people were killed when a SUV carrying 25 people crashed into a semitruck in Holtville, California, about 100 miles east of San Diego. CBS Los Angeles has the latest.