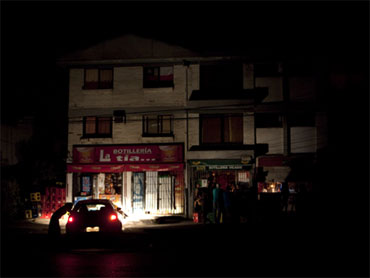 The outage struck around nightfall and affected a 1,200-mile stretch from Taltal in the north to Chiloe in the south, according to the Interior Ministry's emergency office.

Officials blamed a transformer failure that caused a ripple effect and ultimately a total collapse of the Central Interconnected System grid.

An hour after the blackout began, lights began to come back on in some cities - including sporadically in greater Santiago, which is home to 7 million people. Officials there initially reported having just 8 percent of the supply needed to meet demand for a normal Sunday evening.

Some users on the social networking site Twitter reported very early Monday morning that power had been restored to most of the country.

Between 80 percent and 90 percent of Chile's 17 million people get power from the system and were affected, said Eduardo Andrade, vice president of electricity distributor Transelec.

"We hope to restore electrical supply in the coming hours, though we cannot anticipate a specific timeframe," Interior Minister Rodrigo Hinzpeter said. "We are working very hard so that happens as soon as possible."

Hinzpeter said the blackout did not coincide with one of the dozens of powerful aftershocks that have jolted the nation since the Feb. 27 quake and subsequent tsunami, which killed at least 497 people and caused an estimated $30 billion worth in damage.

Hundreds more are still missing, and President Sebastian Pinera said Friday that the death toll is likely to rise.

Like the initial quake and some of the stronger aftershocks, the outage sent many Chileans out of their homes, shopping malls and movie theaters and into the streets. Dozens of passengers were evacuated from subway cars in the capital, but there were no reports of any injuries.

Authorities were investigating, but Presidency official Cristian Larroulet said that "the most likely thing is that the blackout is the result of a weakness in the (transmission) lines as a result of the earthquake."