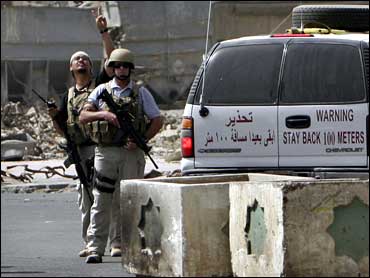 The U.S. Embassy resumed limited convoy movements with Blackwater USA protection in Baghdad, four days after all land travel by U.S. diplomats and other civilian officials was suspended in response to Iraqi outrage over the alleged killing of civilians by the American security firm.

U.S. Embassy spokeswoman Mirembe Nantongo said the decision was made after consultations with the Iraqi governments and the convoys will be allowed to leave the heavily-fortified Green Zone on a select basis.

"All movements supported by the PSDs have to be mission-essential," she said, referring to an acronym for personal security details run by Blackwater and other security contractors protecting Westerners and other dignitaries in Iraq.

Secretary of State Condoleezza Rice said Friday she had ordered a "full and complete review" of security practices for U.S. diplomats.

Rice said she had directed the State Department to examine "how we are providing security to our diplomats."

Rice had no comment about Friday's resumption of Blackwater-protected convoys but paid tribute to the guards from the firm, one of three that provide security for U.S. diplomats and other civilian government officials in Iraq.

"We have needed and received the protection of Blackwater for a number of years now, and they have lost their own people in protecting our people in extremely dangerous circumstances," she said.

A top aide to Maliki conceded it may prove difficult for the Iraqi government to expel Western security contractors.

The aide, who spoke on condition of anonymity because the investigation into Sunday's incident was ongoing, said a way out of the Blackwater crisis could be the payment of compensation to victims' families and an agreement from all sides on a new set of rules for their operations in Iraq.

An Interior Ministry spokesman, Maj. Gen. Abdul-Karim Khalaf, said Friday that a report had concluded that Blackwater guards opened fire from four positions on a square in western Baghdad after a vehicle near their convoy failed to stop.

Iraqi witnesses and officials have offered several conflicting versions of events and it was not clear how the Interior Ministry report would affect a joint U.S.-Iraqi investigation.

Today in Washington, Jeremy Scahill, author of the book "Blackwater: The Rise of the World's Most Powerful Mercenary Army," told the Democratic Policy Committee that these private security firms have a long history of being particularly aggressive and abusing their power in Iraq.

"While the headlines of the past week have been focused on the fatal shootings last Sunday, this was by no means an isolated incident nor is this simply about a rogue company or rogue operators. This is about a system of unaccountable and out of control private forces that have turned Iraq into a Wild West from the very beginning of the occupation - often with the stamp of legitimacy of the U.S. government."

Senate Majority Leader Harry Reid, D-Nev., said Congress must take a look at what happened and hold these companies accountable for their actions.

"Regardless of how one might feel about the war, there should be no disagreement about this that it is long past time to confront and constrain these contracting abuses," Reid said.

Kathryn Helvenston-Wettengel, whose son Scott was killed while working for Blackwater, told the committee that the company's failed promises to provide adequate protection for its guards put her son in peril that might have been avoided.

Helvenston-Wettengel's son was killed March 31st, 2004 when their convoy was ambushed while picking up empty kitchen equipment from the 82nd Airborne Division. She said had Blackwater provided a rear gunner as it had promised, their convoy would have seen the insurgents ambushing from behind.

"We must have laws that apply to these contractors," Kathryn Helvenston-Wettengel told the committee today. "Please, I implore you, do not allow them to continue to get away with murder."

A statement by the Kurdish government said the Iranian detained by U.S. forces was part of a delegation of economists and businessmen, with an "official invitation." A spokesman, Fuad Hussein, said the detention was "illegitimate."

Authorities in the autonomous Kurdish region in northern Iraq called for the release of an Iranian detained by U.S. forces Thursday in Sulaimaniyah.

The U.S. military said he was smuggling in roadside bombs as a member of the elite Iranian paramilitary Quds Force, which is accused by the United States of arming and training Shiite militias in Iraq.
The U.S. detentions of Iranians is a sensitive subject for Iraqi officials trying to balance the interests of their rival U.S. backers and Iran, powerful allies of the Shiite-led government.

Kurdish authorities also were irked by the January arrest of five Iranians during a U.S. raid in the northern city of Irbil.

U.S. authorities have said the five included the operations chief and other members of the Quds force. Iran has insisted the five were diplomats in Iraq with permission of the government.

The arrest could further strain Washington-Tehran relations, already taxed by earlier detention of each other's citizens, as well as U.S. accusations over Iranian involvement in Iraq's violence and Iran's disputed nuclear program.

Iran has denied allegations that it is stoking the violence.

Al-Sistani's followers in Basra, 340 miles southeast of Baghdad, refused to attend Friday sermons in their mosques, denouncing the latest assassinations of the cleric's associates, an aide said.

Al-Sistani's representative in the Diwaniyah province, Ahmed al-Barqaawi, was gunned down while driving home to the city of Diwaniyah, about 80 miles south of Baghdad, police officials said.

Hours earlier, one of the cleric's representatives in the Basra area, Amjad al-Janabi, was killed along with his driver in a shooting west of the southern city, police said.

The deaths bring to at least five the number of al-Sistani aides slain since early August but it remains unclear if the killings reflect internal Shiite disputes or are the work of Sunni insurgents opposed to the vast influence enjoyed by al-Sistani over Iraq's Shiites and politics since Saddam Hussein's 2003 ouster.

Al-Sistani's office in the holy city of Najaf declined to comment on the latest slayings. Basra Gov. Mohammed al-Waili called on the government to step up measures to protect clerics.

Rival Shiite groups clashed violently in August in another Shiite holy city, Karbala, during a religious festival that left at least 52 people dead.