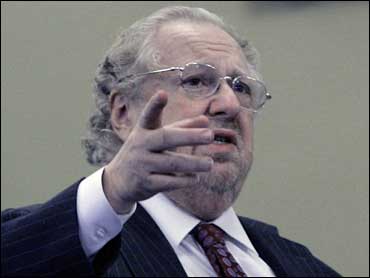 A lawyer for Illinois Gov. Rod Blagojevich told state lawmakers Thursday that the federal wiretaps at the heart of the pay-to-play allegations against his client were illegally obtained, and therefore should be kept out of any impeachment proceedings.

The wiretaps are crucial to the federal charges filed against Blagojevich last week. Prosecutors say they caught the Democratic governor discussing efforts to auction off Barack Obama's U.S. Senate seat and pressure a hospital executive for campaign donations.

Ed Genson told the impeachment committee that it shouldn't consider any material from the wiretaps, saying the evidence was "illegally obtained."

The panel was expected to hear later Thursday from the state's top internal watchdog, who says his own past probes of the Blagojevich administration have turned up improper contracts, incomplete records and sloppy handling of tax money.

Meanwhile, Attorney General Lisa Madigan denied a request by Genson to have the state pay for Blagojevich's impeachment defense. The move was all the more significant because Genson said federal officials are seeking to freeze the governor's campaign fund - $3.6 million as of June - a source Blagojevich could tap to pay his legal bills.

Madigan's office said the impeachment review is a case against Blagojevich's capacity as governor and isn't a court action - a classification that doesn't entitle the governor to taxpayer-funded legal representation.

Genson also appeared before the House panel Wednesday and challenged it on multiple fronts. He said three members should be removed, the committee's rules should be changed and it should not consider accusations in a criminal complaint against the governor.

Blagojevich, who left his home Thursday morning without speaking to reporters, has been under siege since his arrest last week. He got some good news Wednesday when the court rejected Madigan's claim that the governor's legal troubles made him unfit to serve.

The court's decision renewed calls from Republicans for a special election to choose Obama's successor in the Senate. They argue that neither Blagojevich nor Lt. Gov. Patrick Quinn - who would take over if Blagojevich goes - should be allowed to make the appointment.

Genson said he doesn't expect Blagojevich will make an appointment.

"Harry Reid said that they're not going to accept anybody he picks," said Genson, referring to the Senate majority leader. "Why would he do that?"

Blagojevich spokesman Lucio Guerrero said he didn't know if Genson was correct about the governor's intentions.

The Illinois House has appointed a 21-member committee to review the possibility of impeachment. The panel, divided 12-9 between Democrats and Republicans, will recommend whether the full House should move to impeach Blagojevich. If that happened, the state Senate would then decide whether the governor is guilty.

The report outlining potential contacts between his aides and Gov. Blagojevich -- including a reported 21 taped conversations with his incoming Chief of Staff Rahm Emanuel - is being held until next week at the request of federal prosecutors.