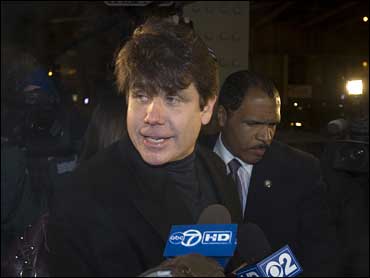 Genson said Monday as he left his downtown Chicago office that Blagojevich had retained him.

Genson has been highly sought after by the rich and famous for his persuasive powers with jurors. His clients have included R&B superstar R. Kelly and Hollinger International media mogul Conrad Black.

Blagojevich is charged with trying to profit from his power to appoint a replacement for President-elect Barack Obama's vacant U.S. Senate seat, among other things.

On Monday, the Illinois House Speaker Michael Madigan announced that he will appoint a special committee to review the case and recommend whether Blagojevich should be impeached. Once the committee makes a recommendation, the full House will decide whether to file impeachment charges against the governor.

"We're going to proceed with all due speed, but we're going to make sure that what we do is done correctly," the Chicago Democrat said.

Republicans and Democrats alike have called for Illinois lawmakers to begin impeachment proceedings against Blagojevich, saying the step is necessary to restore public confidence in state government.

"This isn't about the legal process, this is about the governor being unable to govern right now," Illinois Rep. Jan Schakowsky said on CBS' The Early Show.

Madigan did not join the chorus of officials calling for Blagojevich's resignation or say whether he thinks the governor should be impeached, saying he should remain neutral because he would preside over any impeachment debate.

But he did not back away from his role as one of the governor's harshest critics, saying he's not surprised by the federal allegations. Madigan, who once co-chaired Blagojevich's re-election campaign, often has refused to meet with Blagojevich or return his phone calls in recent months.

"I've had a chance to get to know Mr. Blagojevich over six years, so I was not surprised," Madigan said. "In light of what we've all seen ... how can anyone be surprised?"

Legislators met Monday afternoon for the first time since Blagojevich was arrested last week on charges he shook down businesses seeking state deals and tried to profit from his power to choose a replacement for President-elect Barack Obama's vacant Senate seat.

The legislative session's focus was supposed to be about considering a special election, but impeachment was the chief topic of conversation.

Blagojevich spokesman Lucio Guerrero said the governor "has no plans on resigning Monday."

Guerrero didn't respond directly to whether the governor could or would do anything to slow down the Legislature's move toward impeachment.

"The governor has indicated in the past there is more to this story that he's wanting to tell at an appropriate time," he said.

The GOP plans to run television ads pressuring Democrats to approve a special election to replace Obama. Blagojevich still holds the power to appoint a new senator, and if he resigned, that power would go to Democratic Lt. Gov. Patrick Quinn.

Illinois Republican Party chairman Andy McKenna told reporters the ads will "make the point that this is the people's seat, and the people deserve a special election."

Madigan often has clashed with the Democratic governor, and his office produced a memo this year outlining all the arguments legislative candidates could make in favor of impeachment.

Madigan's daughter, Illinois Attorney General Lisa Madigan, has asked the state Supreme Court to remove Blagojevich from office, claiming he is unfit to serve. Madigan said Sunday she expects word on whether the court will hear her request "probably just in a few days."

"The Illinois constitution does gives the Illinois Supreme Court a role in determining whether the governor is able to serve," she on Sunday.

She said the term "disability" - referencing Blagojevich's ability to serve - is not limited to either a mental or a physical disability.

Lisa Madigan is considered one of the top Democratic candidates for governor in 2010.

Democrats first made the call for a special election, but some are now having second thoughts.

U.S. Sen. Dick Durbin, for instance, was an early supporter, but is now calling for Blagojevich to resign so that the lieutenant governor could appoint a senator.

Opponents of a special election cite the time and expense. It would cost tens of millions of dollars and not produce a new senator until April.

Republicans claim Democrats are wavering because they don't want to risk a GOP candidate winning the special election.

At the Greater St. John Bible Church in Chicago, the Rev. Ira Acree, who met with Blagojevich at his home Friday morning, made only a passing reference to the governor in his sermon Sunday but told his congregation that he had prayed with the governor and that everyone deserves pastoral counsel.