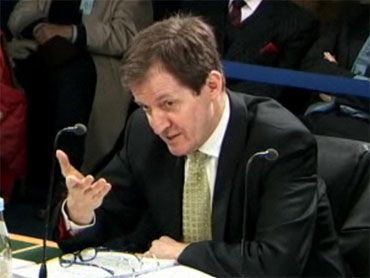 Under questioning from the Iraq Inquiry, Campbell vehemently denied that he "sexed up" the infamous document to strengthen former Prime Minister Tony Blair's case for joining the Americans in an invasion designed to topple Iraqi dictator Saddam Hussein.

He called the dossier "a serious, solid piece of work" - even though much of the information it contained with regard to Saddam's military capacity - and lashed out at the British press for publishing "conspiracy theories" about the war planning.

He denied pressuring Britain's intelligence chieftains to alter their conclusion to strengthen Blair's case for war and said he did not distort the intelligence in any way.

"At no point did anyone from the PM (prime minister) on down say to the intelligence services, look, you have to tailor this case," he told the panel, asserting that intelligence chief John Scarlett and his management team were satisfied with the report and its forward.

It was a spirited defense from the man who served as Blair's top communications strategist from 1997 until his resignation in August 2003. He has consistently denied wrongdoing, telling three other inquiries that the dossier's preparation was handled properly.

The dossier has been ridiculed because of its unfounded claim that Saddam could have nuclear weapons within a year and also the assertion that Saddam had chemical weapons that could be fired within 45 minutes.

Both turned out to be bogus - no weapons of mass destruction were found inside Iraq after U.S.-led forces removed the dictator.

Campbell blamed the inaccuracies on intelligence shortcomings, not any mistakes by himself or Blair.

The former prime minister, whose political position was gravely undermined by widespread unhappiness with the war, is expected to testify before the Iraq Inquiry in late January or early February.

It was clear from Campbell's testimony that he played a central role in the Blair administration. He said Blair believed it was necessary to "embed" a communications strategy into every political discussion so that Blair could communicate his message effectively.

Campbell was among the first major figures from Blair's inner circle to give his version of events to the Iraq Inquiry, the most wide-ranging investigation into the war thus far in Britain.

He contradicted earlier testimony from a former British ambassador to Washington who said Blair dropped his resistance to using the military option against Saddam after a 2002 meeting with President George W. Bush at the leader's Texas ranch.

"On 9/11 itself, in the course of the day, I had a telephone conversation with [Condoleezza] Rice, and said, "Condolences. Anything we can do to help? Who do you think did it?" She said, "There is no doubt this has been an Al-Qaeda operation", but at the end of the conversation, "We are just looking to see whether there could possibly be any connection with Saddam Hussein". That was the very first time on the day itself that I heard the name of the Iraqi leader mentioned in the context of 9/11." (pg. 20)

"I'm not entirely clear what degree of convergence was, if you like, signed in blood, at the Crawford ranch. There are clues in the speech which Tony Blair gave the next day at College Station . . . To the best of my knowledge, but I may be wrong, this was the first time that Tony Blair had said in public 'regime change.' I mean, he didn't only deal with Iraq, he mentioned other issues as well. But he - I think what he was trying to do was draw the lessons of 9/11 and apply them to the situation in Iraq, which led, I think, not inadvertently, but deliberately, to a conflation of the threat by Osama bin Laden and Saddam Hussein. . . . When I heard that speech, I thought that this represents a tightening of the U.K./U.S. alliance and the degree of convergence on the danger that Saddam Hussein presented." (pgs. 29-30).

The committee, chaired by John Chilcot, is expected to hear from key members of Blair's Cabinet next week.

The Iraq Inquiry started hearing testimony in late November. Critics of the invasion had long demanded an investigation into whether the war, which has been extremely unpopular in Britain, was illegal. Many were disappointed when it was announced that the inquiry had no power to apportion blame or establish criminal or civil liability.

Blair has said many times since leaving office more than two years ago that he is confident his decisions were correct.

For more info:
The Iraq Inquiry