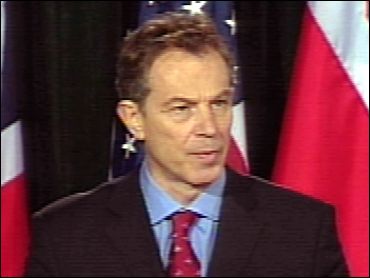 British Prime Minister Tony Blair finds himself fighting a second Iraq war, at home, where he is perhaps battling for the survival of his government, reports CBS News Correspondent Tom Fenton.

Blair will make an unprecedented appearance Thursday before Lord Hutton, a judge who is investigating the death of David Kelly, a government expert on Iraq's weapons of mass destruction. Kelly apparently killed himself two days after testifying to a parliamentary committee that was questioning whether the government oversold the case for going to war.

After two weeks of the Hutton inquiry, things don't look good for Blair. Thousands of documents show a government obsessed with containing damage from Kelly's off-the-record disclosures to the media. Kelly cast doubt on Blair's claim that Iraq could launch banned weapons in 45 minutes.

The inquiry has already revealed that a senior adviser to Blair cautioned him against relying on the claim about Saddam's weapons. Blair went ahead and used it anyway.

Perhaps most damaging, evidence suggests Blair's office pressured intelligence experts to toughen up the language on Iraq's weapons in a government paper setting out the reasons for going to war. The issue becomes: Did Blair deliberately mislead the public?

Political journalist Nicholas Watt says, "What they did in Downing Street was highlight on a few key elements that looked great, made great headlines but have since turned out to be clearly not true."

Polls show that two-thirds of the British now believe the government deceived the public on Iraqi weapons. And almost one-third thinks Blair should resign because of this. It's the biggest crisis of his political career, and it could make him Britain's biggest casualty of the war.