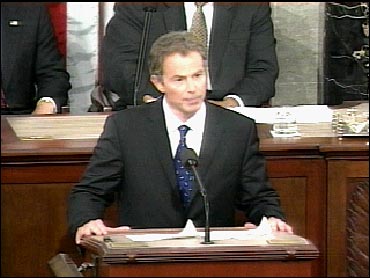 The British government and media continued to absorb shock waves from the suicide of a weapons expert at the center of the growing controversy over claims about Iraq's weapons of mass destruction.

Both Tony Blair and the BBC are facing word-by-word scrutiny of what they said about the case for war.

On Friday, Kelly's body was found near his home in central England. One of his wrists had been slashed.

Kelly's body was found three days after he testified to a parliamentary committee about his unauthorized encounter with BBC reporter Andrew Gilligan, who on May 29 quoted an anonymous source as saying officials had "sexed up" evidence about Iraqi weapons to justify war.

Gilligan said the officials had insisted on publishing a claim that Saddam Hussein could deploy some chemical and biological weapons within 45 minutes, despite intelligence experts' doubts. The journalist later pointed to Alastair Campbell, Blair's communications director, as the key figure in rewriting the dossier. Campbell vehemently denied it.

Politicians across the ideological spectrum have accused the BBC of inaccurately reporting Kelly's comments, citing his testimony that he did not recognize the journalist's most damaging claims as his own. But Gilligan has said he did not misquote or misrepresent Kelly's remarks.

Gilligan's characterization of Kelly is also at issue. Kelly was a former weapons inspector who worked for the Britain's Foreign Office and Ministry of Defense. He was not in intelligence. But Gilligan said his source was a "senior intelligence source."

The dispute could shake British media to its core. In a country where newspapers openly wage decades-long feuds against one another, the BBC — known as "the Beeb" — is loved by some and loathed by others. Feeling about the prime minister is similarly divided. The controversy will likely touch off a feeding frenzy among Blair and the Beeb's respective opponents.

Complicating matters is the fact that the BBC is publicly financed through a tax on all television owners.

Opposition legislators said Monday that the judge investigating Kelly's suicide should also examine the British government's use of intelligence to justify war with Iraq.

Lord Hutton, one of the Law Lords who form Britain's highest court of appeal, on Monday said his inquiry into the suicide would investigate the "circumstances surrounding the death of Dr. Kelly."

"It will be for me to decide, as I think right within my terms of reference, the matters which should be the subject of my investigation," Hutton said, without elaborating.

It was unclear whether Hutton intended to meet demands for a broader inquiry into the government's handling of intelligence on Iraqi weapons.

Blair has said he is prepared to testify before Hutton's investigation, but on Monday he suggested the scope would be limited to Kelly's death.

"This is a very exceptional situation which is why we decided to hold a judicial inquiry, because of the concern that there was," he said during a trip to China. "Of course, there will be continuing debate as to whether the war was justified or not. I happen to believe it was."

"While there certainly does need to be an inquiry into the circumstances surrounding Dr. Kelly's death, there are a very large numbers of questions which all center on the issue of whether the public can trust what the government tells it and which relate to the information given to parliament and the public during the lead-up to war in Iraq," Letwin told BBC radio.

Robin Cook, a former foreign secretary, said it would be impossible for Hutton to get to the bottom of Kelly's death without wading into the wider question of the government's case for war.

Cook, who quit the Cabinet in protest to the war, said the government should "accept the inevitable" and authorize the broader probe.

"The pity is that it did not do so a couple of months ago when it first became evident that it could not find any real weapons of mass destruction," Cook wrote in The Independent newspaper.

Hutton did not give a date for the start of his investigation, which he said he would largely conduct in public. He added that the government had pledged full cooperation.

Blair said he has no intention of resigning over the dispute, as some critics have demanded.