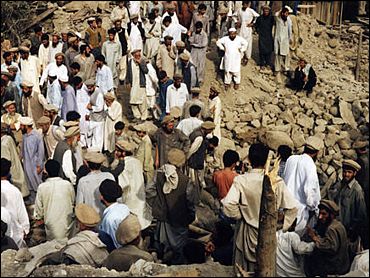 A blaze at a contractor's house ignited dynamite stored inside, triggering a series of firey blasts that killed at least 47 people and injured 150 in a northern Pakistani village.

Many of the victims had been fighting the early-morning fire in Gayal when the explosives — used for building a state-funded water channel — ripped the village apart, destroying or damaging at least half of its 100 homes, witnesses said.

"Suddenly a big explosion jolted the entire village and a flood of fire swept through the nearby homes," said Nazir Ahmed, 20, whose sister and nephew were killed.

Police said the fire appeared to be accidental, sparked by an electrical short circuit. Investigators were checking whether the contractor, who also died, was legally storing the explosives.

Construction crews frequently use explosives to clear land for roads and other projects in the scenic mountainous area — home to K-2, the world's second-tallest peak. The government is trying spur economic growth in the poor region and make it more accessible to tourists.

Mourners wailed and beat their chests as they rushed to bury the bodies in the village, which has a population of 5,000.

"I lost my four relatives just because they were trying to help extinguish the fire," said Faiz Ullah, 25. "For me, the world is finished."

A district government official, Hai Fiza Naushad, said that at least 47 people, including three women and two children, died in the blast. About 150 others were injured and 13 were missing, officials said.

Bahadur Khan, a doctor at Chilas hospital, where most of the injured were taken, said patients described seeing a "huge ball of fire." He also quoted an injured villager, Jan Gul, as saying that he saw dozens of "burning bodies flying in the air."

President Gen. Pervez Musharraf quickly sent a message to the victims' families and ordered the inquiry, the state-run Associated Press of Pakistan reported.

So far, investigators only know that the contractor planned to use the explosives to clear rocks for constructing a government-funded water channel, said Brig. Javed Iqbal Cheema, director general of the National Crisis Management Cell in the Interior Ministry.

Many Pakistani construction companies and fireworks shops do not have proper storage facilities for explosives. A blast at a fireworks plant last month killed a woman and her two children in the eastern city of Lahore. Police suspected that a record-breaking heat wave sparked the explosion.