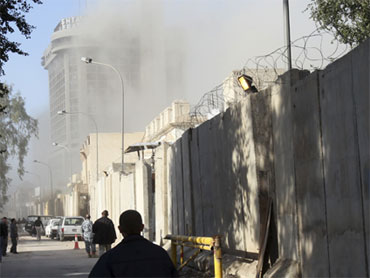 The attacks were another blow to an Iraqi government already struggling to answer for security lapses that have allowed bombers to carry out massive attacks in the heart of the Iraqi capital since August, raising serious questions about the country's stability ahead of the March 7 parliamentary elections.

The blasts were launched over a span of 15 minutes, shortly before Iraq announced it had hanged Saddam Hussein's notorious henchman "Chemical Ali" and gave rise to speculation about possible links to the attacks.

The first explosion struck near the Sheraton Hotel, along the Abu Nawas esplanade across the Tigris River from the Green Zone. The force of the blast toppled a row of 10-foot, 7-ton concrete blast walls protecting the site, tore cars apart and damaged a number of other buildings.

Twisted metal and shards of glass littered the lawns and courtyards of the popular fish restaurants along the river.

Despite its name, the Ishtar Sheraton has no connection to the hotel chain, as the property was confiscated by the Iraqi government following 1991 Gulf War. The hotel has not been a regular hotel for years - it suffered a major bomb attack in October 2005 - and largely houses company offices and some media organizations, but some adventurous international tour groups began using it last year.

Two other blasts followed minutes later, striking near the Babylon Hotel and Hamra Hotel, which is popular with Western journalists and foreign security contractors

Militants in business suits walking alongside a suicide car bomb opened fire on a private security checkpoint at the Hamra, police and guards said. The hotel and the compound in which it is located is home to the Baghdad offices of several Western news organizations, including The Washington Post, McClatchy Newspapers, NBC and The Los Angeles Times.

No Westerners were reported killed or seriously injured in any of Monday's three attacks.

"We took cover and started to shoot back," said Abu Ahmed, a guard working at the hotel.

During the gun battle, the attackers opened the gate to the compound for the suicide car bomb, which then detonated, a police official said.

According to initial tallies, 16 of the victims were at the Hamra, 14 at the Sheraton, and the remaining eight died at the Babylon, including two policemen.

All officials spoke on condition of anonymity because they were not authorized to speak to the media.

There was no claim of responsibility for the latest major attacks in Baghdad - about six weeks after a series of blasts killed 127 and caused an outcry against Iraq's government for repeated security lapses as U.S. troops prepare to withdraw their combat troops by the end of August.

Prime Minister Nouri al-Maliki has consistently painted the bombings last August, October and December as being the work of Baathists working with al Qaeda in Iraq.

Government spokesman Ali al-Dabbagh said the latest bombings "represent an extension" of the activities of insurgents linked to Saddam's regime. But he stopped short of declaring the blast as possible revenge for the execution of Ali Hassan al-Majid, known as "Chemical Ali." He was sentenced to death for poison gas attacks that killed more than 5,000 Kurds in the town of Halabja in 1988.

In Washington, Secretary of State Hillary Clinton condemned the attacks, saying they were an attempt to disrupt the March 7 elections.

"We unfortunately believe there will be continued efforts by the terrorists, by al Qaeda in particular, to try to upend the commitment of the Iraqi people to a democratic future," Clinton said.

The explosions came hours after Interior Ministry officials defended a bomb-detecting device that Britain banned for export to Iraq because of questions about whether it works, saying it would be a "big mistake" to withdraw it from checkpoints.

Guards at checkpoints near both the Sheraton and the Hamra are equipped with the detectors.

"We have great confidence in this device," said Col. Hato al-Hashemi, a senior explosives expert at the Interior Ministry. "They have proven their effectiveness in discovering and seizing many car bombs and cars that were loaded with explosives and weapons."