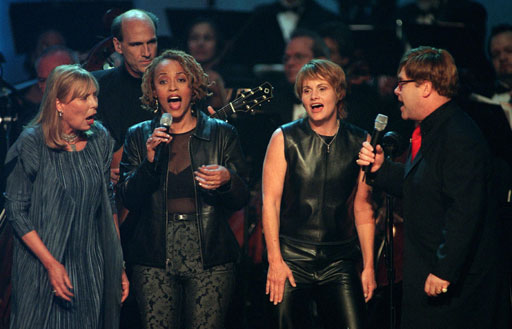 Drew Bledsoe raised his fractured finger in yet another dramatic triumph, the white tape bright against the black sky.

The Buffalo Bills raised their voices in anger at a yellow penalty flag that made that triumph possible.

For the second consecutive week, Bledsoe threw the winning touchdown pass with just four healthy fingers on his throwing hand Sunday as the New England Patriots won 25-21 with no time left on the 1-yard completion to Ben Coates.

"Guess you can start the jokes now," said Bledsoe, who played with a splint. "Why didn't I break my finger in preseason? I don't know if I can take too many more of these."

He was the happy recipient of what the Bills claimed was a gift from the officials. They said Shawn Jefferson was out of bounds on a 10-yard catch that gave the Patriots a first down at the Buffalo 26 with six seconds left. And they were livid about an end-zone interference call against safety Henry Jones that gave New England one more play.

"We were robbed," Jones said. "Terry Glenn jumped for the ball, but no one even grabbed him."

Coates scored on the next play and, with the Bills already in the locker room, kicker Adam Vinatieri an for a two-point conversion against no opposition as the Patriots stayed in the thick of the playoff race.

"Well, they (the officials) gave them the game," Buffalo coach Wade Phillips said. "They might as well give them the extra point."

But it was Bledsoe who hurt the Bills the most after Doug Flutie led them back from a 14-0 deficit to a 21-17 lead on a 2-yard touchdown pass to Andre Reed with 6:14 left.

"Drew played a great game, played with a lot of heart," Flutie said.

Last Monday night, Bledsoe fractured his right index finger on the winning drive leading to his 25-yard scoring pass to Jefferson with 29 seconds left in a 26-23 win over the Miami Dolphins. Sunday, he was 7-for-10 passing on the final series.

"With a broken finger, to find the strength (to do that) really demonstrates the type of athlete he is," cornerback Ty Law said. "He's the leader of our team."

The victory tied the Patriots (7-5) with the Bills, one game behind Miami and the New York Jets in the AFC East.

"Maybe," New England coach Pete Carroll said, "there are no odds that we can't overcome."

Bledsoe, who sat out most of last week's practices, said he felt when he arrived at Foxboro Stadium Sunday he'd be able to play.

"If I felt like the finger was going to be a hindrance, I wouldn't play," he said. He ended up completing 28-of-43 passes for 246 yards and three touchdowns.

The pass that didn't count in his statistics, to Glenn in the end zone, may have been the most important. If no penalty was called against Jones, the Bills would have won.

"He wasn't playing the ball, but he did make contact with the receiver," referee Walt Coleman said. "That's pass interference."

That came one play after the pass to Jefferson on fourth-and-9 kept the drive alive at the Buffalo 26. After the interference, Bledsoe, under pressure from Sam Rogers, found Coates in the back right corner of the end zone.

Until that drive, Flutie had brought the Bills back with the help of Steve Christie's three field goals. The former Boston College star threw for an NFL career-high 339 yards and two touchdowns before New England got the ball for the last time at its own 18-yard line with 1:52 and no timeouts left.

Earlier, Bledsoe led the Patriots on a 6-yard march capped by his 2-yard touchdown pass to Robert Edwards for a 7-0 lead 5:16 into the second quarter. He threw a 12-yarder to Derrick Cullors for a 14-0 lead and was 9-for-10 on the two drives.

Trailing 14-6 at halftime, the Bills closed to within two points on Flutie's 84-yard connection with Eric Moulds, who ran the last 65 yards.

In the end, though, Bledsoe was the local hero.

"I think," said Scott Zolak, who would have replaced Bledsoe, "he's Massachusetts' top quarterback tonight instead of the other guy."