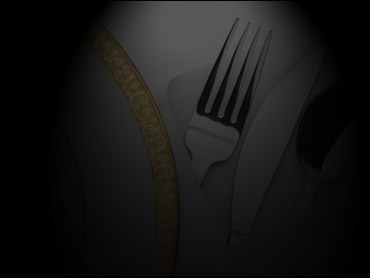 
A man locked the door behind two blonde friends and I and told us to be quiet. He turned off the light.

I admit I was a little scared. Just minutes earlier I had been nursing a glass of Prosecco with Johannesberries dangling from its rim. I had been plucking off the shiny garnet berries one by one. I had been chatting and fidgeting and making feeble attempts at German humor. I had ordered a meal.

But before the meal came, the bartender led us downstairs for the adventure of the evening. In all fairness, we knew what we were getting ourselves into. We were going to eat in the dark.

Standing there in a locked room with no lights, it wasn't "looking" so appealing. But the man instructed us to place our hands on each others' shoulders, and popped open another door. He led us into the dining room. Visually, there was no sign of anything. It was just … dark.

And by dark I mean pitch-dark, tar-dark, ink-black dark. It is the dark of no distant candle flicker. No stars in the sky and no exit signs by which to gain orientation.

The justification behind dark restaurants such as this one, the Nocti Vagus restaurant in Berlin's trendy Prenzlauer Berg, is that dining without sight heightens the other senses that make a meal enjoyable: touch, taste and smell. But hearing also becomes much more important. Is someone sitting next to you? You can only wait for the sound of their knife scraping the plate to be certain, unless you want to reach an arm out and risk a too-intimate encounter with a stranger - or his plate of linguini.

Dark restaurants have been popping up in cosmopolitan cities such as Beijing, London and Melbourne. In 1999, what claims to be the first dark restaurant opened in Zurich, aiming to be a way for sighted people to experience a meal the way a blind person would. It employed blind and partially sighted waiters to guide diners through the experience and donated some of its proceeds to a charity for the blind. Since, dark dining has become a bit of a trend, and hasn't always stayed true to the original Zurich restaurant mission. Dark dining is so popular in China that the Beijing restaurant equips its waiters with infrared goggles, foregoing the blind tie altogether.

Nocti Vagus (Latin for "night-time wandering") opened five years ago with a variation on the original theme. It adds to the blind-dining experience by hosting theatre and music acts on its "dark stage" to nurture the sense of hearing, which can also seem heightened when sight fails.

My dinner dates and I found the music added ambiance, but also provided confusion. Where was the stage? Where was the band? How could they see their guitar strings or keys? What the heck kind of instrument is that?

"The idea is to teach people how it is to be blind and have a completely new experience," Nocti Vagus's Daniela Kobelt later explained.

That it did. After we had fumbled for our chairs and were comfortably oriented to our table, silverware and water goblets, it came time to get down to the business of eating. And this would be eating without seeing what's being eaten - or who is bringing it to you.

Our server, Constanza, seemed to be approaching. I felt her hand on my shoulder and suddenly a cold, smooth thing in my hand. A wine glass! I felt a victory. And I managed to pour the wine without knocking anything over - miraculously, my touch had become slow and delicate ... perhaps too delicate. Once I had poured for several seconds, set down the bottle and lifted the glass to my lips, I realized there was but a small splash of wine in the glass. I didn't miss the glass - I had just overcompensated in gentleness.

Constanza brought salads, and we each reached for the breadbasket, hands knocking into each others'. And somehow we each managing to dunk our fingers directly into - eesh! - a creamy dipping sauce.

Once napkins had been located, we began wondering why Nocti Vagus doesn't fasten each diner with a torso-sized bib upon entering the restaurant. Fortunately, the salads were not too sloppy. But eating them did teach us that the use of silverware would be all-but-impossible. Aside the risk of stabbing your cheek with your fork, using silverware allows little connection with a morsel of food before it reaches your mouth. In the interest of knowing what I was ingesting, I did the logical: I dug in with my hands.

"Aaah, I just ate an orange rind!" said another.

Once we had cleaned our salad plates, we needed our waitress. But in the dark, there's no subtle way of signalling a server. Winks, shrugs and flailing are all rendered null.

We spent two more delicious - and ostensibly lovely - courses pondering what's possible in the dark. We could crawl under the table or wave our arms or take off our shirts. No one would know (except maybe dear, perceptive Constanza). Would this be a good date place? Would you feel closer to your companion or alienated?

Losing the sense of sight did make me feel like I was in a bubble, out of touch with anything beyond arm's reach. But I did feel extremely aware of what I was tasting - its texture, temperature and subtle flavors. There seemed to be sage in the pesto and a hint of espresso in the chocolate mousse. Each bite was a new test of often-neglected taste buds.

"It is of course something new that enhances your senses," explained Nocti Vagus manager Astrid Gonszak. "Before dinner they are quite excited, and afterward they are surprised that it worked so well."

Aside from a brief incident of wine-chugging at the end of the meal (without the visual reminder I had forgotten about my wine), it did go very well. But not so well that I wasn't overjoyed to re-engage my sense of sight and step back outside into the bright light of the Berlin night.