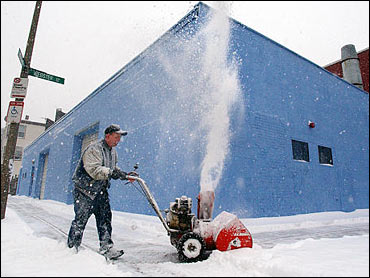 The worst blizzard in seven years shut down much of the Northeast on Presidents Day with blinding, windblown snow that piled up as much as 4 feet deep and left more than a quarter of a million homes and businesses shivering without power.

The storm has headed north and is now pounding New England. So far, there is already 17 inches of snow at Logan International Airport in Boston. In western Massachusetts, things are even more intense - statewide, the western Massachusetts town of Goshen has the most snow: 21 inches, the last time they got the yardstick out.

At least 28 deaths have been blamed on the storm system since it charged out of the Plains during the weekend, piling snow in the Ohio Valley, producing mudslides and floods in the southern Appalachians, and making layers of ice that snapped trees and power lines.

Among those killed was an 83-year-old Pennsylvania man who sought shelter inside his parked car when his home heating system failed died inside the car. Officials said he died either of hypothermia or carbon monoxide poisoning.

Airports for Washington, Baltimore, Philadelphia and New York largely shut down, stranding thousands of passengers trying to leave and get into the region. Amtrak's north-south service was halted between Washington and Richmond, Va., and regional bus service stopped in many areas.

The holiday meant there were few commuters, but police from Kentucky to Massachusetts pleaded with motorists to stay home and some counties banned nonessential travel so they could clear the roads.

"This is going to be days worth of cleanup," said Maryland Highway Administration spokesman David Buck.

The western tip of Maryland was buried, with 49 inches of snow in Garrett County on top of 30-foot drifts left by earlier storms. Area roads, some surrounded by 12-foot-high walls of snow, "look like canals," said Garrett County state highway supervisor Paul McIntyre.

"It's no man's land out there," said McIntyre, whose office window in Keysers Ridge, elevation 2,900 feet, was entirely blocked by snow. "It looks more like Siberia than Maryland."

Among the many travelers stranded by the storm, few were as far from home as Lynn Anderson of Belfast, Ireland.

"It's turned into a complete nightmare," said Anderson, who arrived in Philadelphia on Sunday hoping to go to Williamsburg, Va., but had to stay overnight in a downtown Philadelphia hotel.

Staff members at Baltimore-Washington International Airport distributed blankets and pillows to the some 150 travelers who spent the night there. The Port Authority of New York and New Jersey, which operates Newark, Kennedy and LaGuardia airports, supplied cots and blankets.

Thousands of travelers trying to get home from vacations were stuck at Florida airports.

"We are not going anywhere," Elizabeth Huffman said at Miami International Airport after finding her flight home to Washington was canceled. Her husband found an alternative: "We are thinking about going to the beach for the day."

The heavy snow was blamed for several roof collapses in New Jersey, including one that killed a man at a job-training school in Edison. In Maryland, a roof fell in at the B & O Railroad Museum in Baltimore.

States had thousands of crews plowing and spreading salt. Maryland Gov. Robert Ehrlich said the storm had cost between $20 million and $30 million - and the state was already $14 million over budget for road cleanup this season.

New York Mayor Michael Bloomberg estimated the storm, measured in Central Park at 19.8 inches by early evening, already had cost his city around $20 million. By early evening, the snow had ended in the city.

Plows built piles of snow two stories high along some streets, including Fifth Avenue near the Saks department store in Midtown Manhattan, where tourists took pictures of each other standing on the gigantic mounds of snow.

Weather-related deaths included two in Illinois, one in Nebraska, five in Pennsylvania, six in West Virginia, six in Missouri, one in Ohio, two in Virginia, one in New Jersey and four in Iowa.

In Tennessee, the search for two children missing after the car in which they were riding was swept off a bridge by high water Sunday was called off until Tuesday. Their aunt, who was driving, was rescued.

The Big Blizzard, State By State