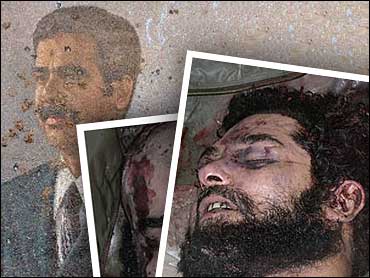 The U.S. military released graphic after-death photographs Thursday in an effort to prove to Iraqis that Saddam Hussein's feared sons, Odai and Qusai, were killed in a fierce gunbattle this week.

The photographs, released in Baghdad, showed the battered, bearded faces of the two dead men. (Editors note: The photos, including some published on CBSNews.com, are graphic and may be objectionable to some readers.)

Two U.S.-military photos showed the first man, identified as Qusai, with bruises and blood spots around his eyes. That face was far more intact than the other, identified as Odai; the mouth was open and the teeth showing.

Looking at the photographs, some Iraqis say one is quite recognizable, while the other one is harder to identify due to the bloodied and damaged face.

The face of what appeared to be Odai, the older brother, was severely bloodied. A gash ran from his left eye to the right corner of his mouth, and bruises and blood over his bald forehead, suggesting to some observers, CBS News reports, that Odai may have shot himself in the mouth.

Washington had hoped that the deaths of Odai and Qusai would weaken the anti-American insurgency, but an attack on a convoy Thursday killed three Americans from the division that led the assault on Saddam's sons' hide-out.

L. Paul Bremer, the U.S. administrator of Iraq, told a Pentagon news conference Wednesday that the deaths of Saddam's sons "will in fact in time help reduce the security threat to our forces."

"In the initial period I would not be surprised to see an uptick in violence against our forces," he said, emphasizing that in the long run the deaths would likely encourage Iraqis to give authorities tips about other members of the Baath Party.

CBS News Correspondent Byron Pitts reports, mistrust lingers with some Iraqis, who say the U.S. photos are not enough to convince them that Saddam's sons are dead.

The brothers' bearded faces caused suspicion among some. "If they shave it a little bit, maybe we can be sure," one man told Pitts

Others said they were convincing.

"The careers of the two of the regime's ... henchmen came to an end," Bush said Thursday. "Now more than ever, the Iraqis can know that the former regime is gone and is not coming back."

The photos showed the upper torsos of the men, who were bare-chested — one lying on bloody, white sheets, the other in what appeared to be a body bag. Both had their eyes closed, the lids darkly purpled.

The brothers had never worn such thick beards, and may have been trying to disguise their identities as they spent 3½ months in hiding from coalition forces.

The pictures were immediately broadcast to the Arab world including Iraq by two Arab satellite television networks, Al-Jazeera and Al-Arabiya.

Abbas Fadhil, a 44-year-old barbershop owner, said he had no doubts after seeing the pictures on Iraqi TV that the photographs were of the brothers, but was confused by the U.S. decision not to show the bodies in full.

"The doubts will remain because the coalition forces didn't show them from the front and the sides, didn't show their profiles," he said, adding Qusai's photograph was a perfect image of him.

"They should show more pictures to be more convincing," he said.

Alla Khalifa, 32, a barber in the shop, said he doubted the pictures of Odai were authentic because he appeared to be slightly overweight.

"Odai is a tall man and thin, but the picture shows him as short and thick," he said, while shaving a customer's face.

But Qusai's picture left no room for doubt, he said, adding it featured his profile.

But some Iraqis remained unconvinced nevertheless.

"I'm not convinced the pictures shown are of Odai and Qusai, and even if they were I'm not happy. I would have been happy if they were captured alive and brought to justice before the Iraqi people," said Shant Agob, 37, an accountant who saw them broadcast on CNN in a Baghdad hotel.

Lt. Gen. Wafiq al-Sammarai, former head of Iraqi military intelligence who defected in the '90s and is with the Iraqi opposition, told Al-Jazeera he was not convinced.

"The pictures are not clear. They don't give a clear idea, and personally I can't take them as evidence that these two bodies are Odai and Qusai." The bodies are deformed, he said, but other indicators make "me believe that Qusai and Udai have vanished," al-Sammarai said.

While some in the Arab world criticized the United States for releasing what they believed to be fake photographs, others argued that even if they were authentic, releasing them violated standards the U.S. itself had championed.

"When Iraq broadcast photos of dead American soldiers, the U.S. considered that against human rights," said Jordanian political analyst Sahar al-Qassem said. "So, why are they violating that now by showing such inhumane pictures?"

"This is an unusual situation," Secretary of Defense Donald H. Rumsfeld told a Pentagon briefing, standing alongside Bremer. "This regime has been in power for decades. These two individuals were particularly vicious individuals. ... They are now dead. ... The Iraqi people have been waiting for confirmation of that and they in my view deserve having confirmation of that."

On Thursday, the U.S. military also released pictures of Odai and Qusai when they were alive for comparison, as well as X-rays of Odai's leg, which was injured in an assassination attempt in the 1990s.

They were killed in a gunbattle with U.S. forces at a villa in the northern city of Mosul after an Iraqi informant tipped the Americans off to their presence there.

But, reports CBS News Correspondent Jim Stewart, sources say U.S. intelligence had already sniffed out the same lead and the tipster only confirmed their suspicions.

The military has said the brothers and a third man, believed to have been a bodyguard, were killed by U.S. TOW missiles fired into the villa where they were hiding out Tuesday. A fourth person in the house, believed to be Qusai's teenage son Mustafa, was shot to death by troops storming the house after the missiles devastated it.

The United States located the brothers weeks after the U.S. military offered a $15 million reward for information leading to the capture or death of either. Odai and Qusai were Nos. 2 and 3 on the U.S. list of 55 most-wanted from the toppled Saddam regime.

In Baghdad on Thursday, some members of Iraq's Governing Council were shown the brothers' bodies, which were being stored at Baghdad International Airport, a Coalition Provisional Authority official said.

The Hussein brothers were Nos. 2 and 3 on the U.S. list of 55 most-wanted from the toppled Saddam regime.

Three American soldiers were killed Thursday when their convoy was hit by gunfire and rocket-propelled grenades in northern Iraq, a military spokeswoman said. In Baghdad, two Iraqis were killed when their car approached a U.S. military checkpoint.

The soldiers, members of the 101st Airborne Division, were traveling in a convoy toward Qayyarah, 185 miles north of the capital, Baghdad, when they were attacked at about 2:30 a.m. No soldiers were reported wounded.

CBS Pitts' reports the soldiers travel in large groups with heavy arms, and have been ordered not to talk to reporters. One soldier approached for an interview quickly excused himself saying only, "I have to go. No comment," Pitts reported.

The latest deaths brought to 158 the number of U.S. servicemen killed in action since the war began March 20, surpassing by 11 the death toll in the 1991 Gulf War.

Also Thursday, Arab satellite broadcaster Al-Arabiya aired a tape of what it said were a group of Saddam Fedayeen vowing revenge for the deaths of Odai and Qusai Hussein.