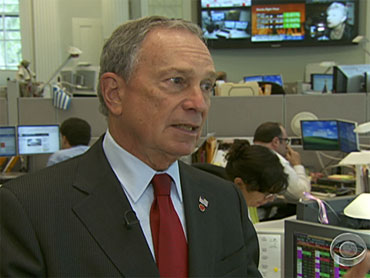 Well, whaddya know? The mayor of the Big Apple also turns out to be quite the consumer of information technology and social media - not to mention being quite the name dropper.

"I am the proud owner of a new iPad. It's amazing. I told Steve Jobs the other day if he can improve on this it will really be amazing," he said during an appearance at a conference organized by the tech web site TechCrunch.

"Every time I play with it I discover something new. And so before this morning's conference I also updated my Facebook page, sent a Tweet, browsed my Digg feed and checked in at Foursquare. And I even posted a personal on Craigstlist. (laughter) I did. Wanted: Cleveland basketball star to save basketball in the Big Apple. Whether LeBron's reading it or not, I don't know."

Then Bloomberg got down to more serious matters - specifically making a pitch for New York as a venue for high tech startups. Bloomberg announced that an early stage fund established several months ago now has $22 million to invest as part of a new association with FirstMark Capital.

The first $300,000 investment from that fund went to a mobile app provider MyCityWay as part of an earlier-announced competition soliciting new software applications.

"We liked what they did so much we not only listed them as a Big Apps winner; we also chose to invest in them," he said. "They have moved from New Jersey to New York City."

Bloomberg also said that the city plans to establish a media lab later in the year at a local university which, he said, would be akin to what's going on nowadays at MIT.

"In New York City, we understand innovation drives economic growth. We're nurturing information technology. If you have an idea, or a product, or an app, New York City is the city for you. Business is better here," he said. "I can't guarantee you will be successful, but it's an awful lot easier to attract the best and brightest, and to interface with other people. If you're a smart people this is the happening city."

Perhaps with an eye on the controversy surrounding Arizona's restrictive immigration law, Bloomberg called New York the most "immigrant-friendly" place in the United States," he said. "We live as a mixture, not as a mosaic." You can find the  video of his entire address in the link below: