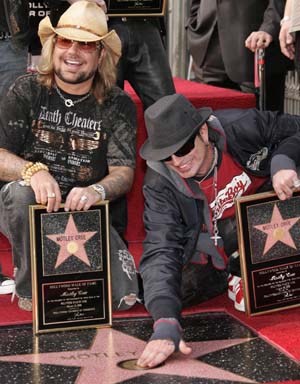 The Dow, which on Monday pushed back above 9,000 for the first time since late July, would have essentially broken even on the day if not for Hewlett-Packard, which fell the equivalent of 24 Dow points. Hewlett-Packard is a component of the Dow.

After Monday's close, the computer and printer maker posted a quarterly profit that topped Wall Street's deflated forecasts, but warned anew of the continuing impact of economic weakness in Asia and Latin America.

The Fed's Federal Open Market Committee trimmed the federal funds rate, its key monetary policy lever, to 4.75 percent from 5 percent. The move follows similar cuts taken on Sept. 29 and Oct. 15. The funds rate is the rate that banks charge each other for overnight loans.

The central bank said: "Although conditions in financial markets have settled down materially since mid-October, unusual strains remain." The FOMC next meets Dec. 22.

"By characterizing the settling down in the markets as 'material,' the Fed is implying that they feel the process of stabilizing the markets is mostly done, albeit incomplete ('unusual strains remain')," said Tony Crescenzi, chief bond market strategist at Miller, Tabak, Hirsch & Co. "

In the bond market, the initial knee-jerk reaction to the news was a healthy rally but gains were promptly reversed as buying cooled off and issues fell into negative terrain.

"I'm not sure the cut was really necessary or practical," said Roy M. Blumberg, portfolio manager at First Allied Securities. "In my mind, the Fed is losing a little ammunition here, because if we do have a problem with the market or economy later on it won't be as easy to takanother [rate] easing.

"We're in a marketplace where they're forcing the bears to become bulls," Blumberg continued. "Those that want to be bulls are having a hard time joining in because they're hoping they're going to get some kind of pullback to do it. And they're not getting that.

"Luckily, I wasn't part of that bear camp, so I don't have that concern."

Speaking at a conference of security analysts in Denver, Prudential Securities Director of Technical Research Ralph Acampora said he looks for the Dow Industrials to surpass 10,000 in 1999.