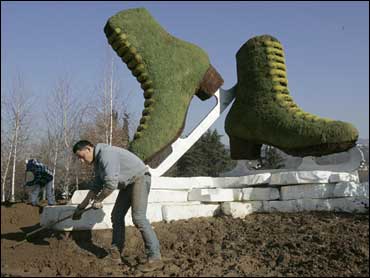 Three nights after leaving a game with back spasms, the St. Louis Blues' goalie got his first shutout of the season in a 4-0 victory Tuesday night over the Nashville Predators.

"Spasms happen, and I really wanted to play," said McLennan, who had two shutouts last season. "I'm glad we got a few days between games."

McLennan left Saturday's game against Dallas after one period. After two days of treatment, McLennan woke up Tuesday feeling fine, and he showed no signs of stiffness against the Predators, turning away 19 shots.

That was good news for the Blues because McLennan is the backup to the injured Grant Fuhr, who's out 4-6 weeks with a groin strain.

If Mclennan couldn't play , rookie Rich Parent would have gotten his first career start. But McLennan is anxious to prove himself while Fuhr is out.

"He's getting a chance for some quality ice time in the nets," coach Joel Quenneville said. "He made a couple of really big saves."

The Predators said they made it too easy for McLennan.

"I thought he played well but we didn't test him as much as we wanted to," center Cliff Ronning said. "We only had a few odd-man rushes."

Pavol Demitra had a goal and two assists for the Blues, who got their third look at the expansion Predators in 11 days. The Blues won 5-1 at home Nov. 14 and los3-2 on a last-minute goal by Ronning on Nov. 19 at Nashville.

That game was on the Blues' minds.

"We definitely feel we gave away two points, and that's very frustrating," said Scott Young, who scored in the first period. "With the parity in this league, you can't do that."

The central division teams meet three more times, but the next matchup isn't until Jan. 1 in Nashville.

Al MacInnis and Pierre Turgeon also scored for the Blues. Four of Young's eight points have come against the Predators, and his first-period goal was his first since Nov. 14, when he had a goal and an assist at home against Nashville.

The first two goals came on the power play. The Blues entered the game with the NHL's top unit at home with nine goals in 34 chances and were 2-for-3 against Eric Fichaud.

"We weren't able to contain them," said Nashville coach Barry Trotz. "As a result, we really left Fichaud out to hang a little."

Demitra, who moved up to the top line after Brett Hull left as a free agent, set up Young's goal at 7:45 of the first with a pass from behind the net for his 100th career point in 87 games. He deflected a shot from the point by Jamie Rivers past Fichaud at 15:06 of the second period for a 2-0 lead.

Demitra, who had 22 goals last season, leads the Blues with 10 goals and has seven goals and seven assists in the last nine games. Seven of his goals have come on the power play.

MacInnis, who had 19 goals last season but is shooting a lot more this season, got his ninth goal on a wrist shot at 13:22 of the third. The puck deflected off Nashville's Darren Turcotte.

Turgeon got his ninth goal with 1:26 to go when the puck sneaked between Fichaud's pads on a Pascal Rheaume shot, and he tapped it.

"A lot of the pucks were deflected and bounced off players," Fichaud said. "I don't know if it's bad luck or what."