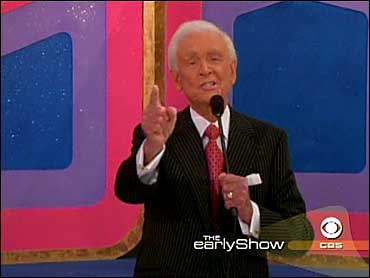 In 1972, "The Godfather" was a filling movie houses, "Stairway to Heaven" was climbing the music charts, and Bob Barker was joining "The New Price Is Right."

The show is hardly new anymore — its title is now simply "The Price Is Right" — and Barker is marking his 35th anniversary as host.

On the set of the famous game show, Early Show co-anchor Julie Chen asked Barker what goes through his when he contemplates having hosted the show for 3½ decades?

"I'm dedicated to it," he told Chen. "I've been told by people that, when they turn on the show, it doesn't look as if I've been doing it 35 years, it looks like Opening Day."

Some things have changed since Barker's debut. Back then, the announcer didn't tell people to "come on down" — as he now does in the game's famous signature phrase — he told audience members who were about to become contestants to stand up!

The first prize was something Barker, an ardent animal rights activist, would later see to it was never given away on the show again: a fur cost.

But, Chen remarked, what's most striking is how much has stayed the same on the show.

Asked if the staff has ever considered any tweaks, Barker jokingly shot back, "Please, tweaketh not! We have such a delicate thing here. We have something that is really sensitive to everything, and when I come out and talk to the audience during commercials, I'll say someone has suggested maybe we should change something, and they shout out, 'No, no, no!' The word 'change' frightens them. 'Don't change anything, Bob. Ever!' And we don't."

Barker showed Chen a hallway lined with appliances, boats, cars, television sets and other prizes, as well as many of the 80 games currently rotated in "The Price Is Right."

At 82, Chen observed, Barker still has the same energy he had 35 years ago.

Only his hair color changed, (seemingly) overnight ... when he decided to stop dyeing it brown.

"I came through the doors with white hair and the audience reaction was great. 'Yayy, yayy!' Barker remembered. "I got a letter from a gentleman in the Midwest who had seen the show (which is taped) one day with my dark hair and the next day with the gray hair. He wrote, 'Bob, you must have had one hell of a night!' "